Joe Camilleri’s 21st album with The Black Sorrows, Citizen John, has debuted at #11 on the ARIA Chart. Not stopping there, the album hit #2 on the AIR Chart, and was the third highest-selling physical album of the week. These fantastic results make Citizen JohnJoe’s highest charting album in 29 years, since the double-platinum Harley & Rosereached the #3 spot in 1990.
‘An artist living in the moment, still creating exhilarating work.’ – STACK
For Joe Camilleri and The Black Sorrows, the new album is about perpetual change.
“I’m not a heritage act. I’ve never been a heritage act. I’ve always been a constant player. The Sorrows continue to thrive and grow not because we’re an ‘80s band, or a ‘90s band, or any other kind of band. We exist because of the now. Just treat me like a new act,” he says. “It’s just that this one’s got a very old face.”The Black Sorrows are almost at the conclusion of their Australian tour, with four final shows in New South Wales this weekend, before they head to Byron Bay for to headline the Jambalaya Stage at Bluesfest. The Black Sorrows will then travel to Europe for a string of dates across the continent. 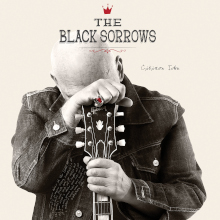