After releasing a teaser track in the form of a  five-minute Greta Thunberg speech, The 1975 have unveiled the first single from their forthcoming album Notes on a Conditional Form. “People” is slick and noisy, with sharp, punchy riffs, and lyrics about generational angst.

“Well my generation wanna / fuck Barack Obama / Living in a sauna / with legal marijuana,” shouts Matty Healy. “Well girls, food, gear / I don’t like going outside / So bring me everything here.” 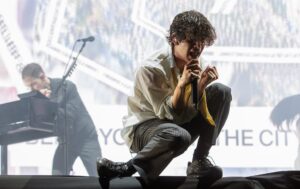 The band have also released a music video for the track, in which screens flash, guitars are shredded, and Healy detonates a suicide vest that explodes into Instagram and Facebook likes. Notes on a Conditional Form arrives February 21, 2020, It will be 22 tracks long, making it their longest album to date.

In an interview with Annie Mac on BBC Radio 1.  Healy explained that the album would be inspired by British nighttime culture, adding that it contains references to “the beauty of the M25 and all those lights and going to McDonald’s and listening to garage records in a haze in a Peugeot 206. ” He also told Q  magazine that the album has a style similar to English alternative hip hop  music group The Streets and British electronic musician Buriel. In a separate interview, he added that the record has “some  of my best lyrics ever.”