Due to the ongoing COVID-19 pandemic, Laneway Presents, Chugg Entertainment & Frontier Touring wish to advise that Tame Impala are rescheduling their upcoming Australian and New Zealand The Slow Rush Tour from December 2021 to October 2022.

Tame Impala are back on the road in North America this month, performing their very first live shows anywhere in the world after an extensive delay. Their Australian and New Zealand shows are unable to proceed as planned in December 2021, due to ongoing changing local and international border closures and associated Government directives in both countries.

Tame Impala will now hit our shores for their epic live shows in Spring 2022, kicking off their rescheduled tour at Auckland’s Spark Arena on Saturday 15 October 2022. Limited tickets remain and are on sale now for all 2022 dates.

Current ticketholders are advised to hold onto their tickets – tickets to the December 2021 shows are valid for the corresponding rescheduled October 2022 dates (see below), with no action required. Patrons unable to attend new dates meanwhile may obtain a refund. Refund requests must be submitted prior to Friday 22 October – for AU shows, please follow the steps in the link here. #keepyourtickets

In exciting news, Tame Impala also today announce that rising stars Genesis Owusu and Sycco will join them on all Australian dates in October 2022.

One of Australia’s most exciting emerging talents, Canberra rapper Genesis Owusu is a force to be reckoned with. His debut album Smiling With No Teeth is music in a league of its own, surpassing genre and disrupting boundaries. The record garnered critical praise on release in March 2021, NME calling it a “transcendent conceptual opus”, Rolling Stonetouting it as “the making of a music giant” and The Guardian claiming it to be “a freaky, funky marvel of a debut”. Known for his multi-faceted showmanship, Owusu will bring a powerful live performance when he hits the stage at arenas around Australia next year. Listen to Missing Molars here.

Nineteen-year-old First Nations writer/producer Sycco is riding a high following an epic breakout year in 2020. Her hit single ‘Dribble’ came in at #29 in triple j’s Hottest 100 in 2021, and since then she’s eclipsed over 20 million streams, accumulating over 500,000 monthly listeners on Spotify alone. Quickly establishing herself as one of Australia’s most promising and popular new artists, Sycco’s colourful, psychedelic-pop sonics and crystal-clear melodies have gained her global recognition – while her debut EP, Sycco’s First EP,was released to acclaim in July 2021. Back in April, Sycco took on Tame Impala’s “Lost In Yesterday” for a cover at the 2021 APRA Music Awards – a track she’s also just released, listen here.

One of Australia’s greatest musical exports, Tame Impala claimed #1 on triple j’s ‘Hottest 100 of the Decade’ countdown with 2015 track ‘The Less I Know The Better’. The band’s acclaimed 2020 album, The Slow Rush, was triple j’s Feature Album on release, with three album tracks featuring on their impressive home concert for NPR’s Tiny Desk series, and stunning renditions of singles ‘Lost In Yesterday’ and ‘Breathe Deeper’ performed live on Jimmy Kimmel Live! In March last year. The band recently performed their first headline show in ages in Chicago, where they threw in a cover of Travis Scott’s ‘SKELETONS’, (which Kevin Parker produced for the rapper’s acclaimed Astroworld album).

Tame Impala, Chugg Entertainment, Frontier Touring and Laneway Presents thank fans for their support and understanding during these unprecedented circumstances. 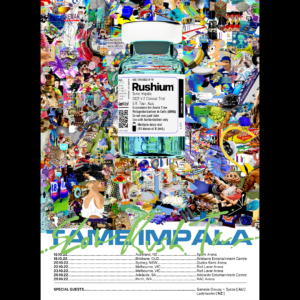 ALL SHOWS ALL AGES