Frontier Touring are thrilled to welcome Dublin three-piece, The Script, back to Australia, four years since their last headline shows down under.  The group will touch down next September for four stellar performances in Brisbane, Sydney, Melbourne and Perth as part of their Greatest Hits Tour 2022.

Kicking off on Thursday 15 September 2022 at Riverstage, Brisbane the tour will head to Sydney’s Aware Super Theatre on Friday 16 September, then to Sidney Myer Music Bowl Melbourne on Saturday 17 September before wrapping up at Perth’s RAC Arena on Tuesday 20 September.

The group will be touring in celebration of their Tales From The Script: Greatest Hits album (out tomorrow October 1 through Sony Music Australia), a compilation of their biggest hits and fan favourites from their six studio albums so far.  The album highlights classic cuts from the trio’s stellar catalogue, including the likes of the UK #1 smash ‘Hall of Fame’ (featuring will.i.am) and Top 10 hits ‘The Man Who Can’t Be Moved’, ‘For The First Time’ , ‘Superheroes’ plus new single ‘I Want It All’.  It also includes landmark moments and staples of their live show; ‘Breakeven’, their debut single ‘We Cry’ and ‘Rain’.

Almost three years since their last release, The Script will return to Australia with their greatest hits and tracks from their most recent studio album Sunsets & Full Moons.  Marking the bands sixth No. 1 in their home country and fifth No. 1 in the UK, the group’s sixth studio album was received highly with fans and critics alike, amassing more than 143.89m+ streams.

‘But it’s that smoke and mirrors moment that takes the gig to the next level as the trio emerge miraculously in the stadium’s seats for stripped-back versions of ‘If You Ever Come Back’ and ‘Never Seen Anything (Quite Like You)’. – Scenestr

Frontier Members can access their pre-sale from Tuesday 5 October, before tickets go on sale to the general public on Friday 8 October.  Secure tickets early to avoid missing The Script live on Australian shores for the first time in over four years.

VIDEO: ‘Break Even’ by The Script 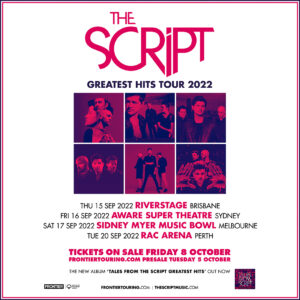 ALL SHOWS ALL AGES *
* U18s must be accompanied by a parent/legal guardian
** This event is recommended for patrons aged 16+.