SYDNEY INDIE DUO DUST OF US

Pouring elements of nostalgia, introspection and self-awareness into their songwriting, Sydney sibling duo Dust Of Us were quick to garner attention with the release of their single ‘7 Years’last year. Following their debut – ‘The Swans’ – in March of 2019, ‘7 Years’ brought more listeners to the outfit, who have since been working on putting the finishing touches on their debut EP.

Today Dust Of Us shares the official music video for ‘7 Years’. The clip might have had a prolonged gestation, but the final result is worth the wait; capturing intimacy and isolation with great balance.

Creating art in the middle of a pandemic has forced artists to think outside the box and for Dust Of Us, it took this period of unpredictability and strange pause to find the right treatment for their video.“We wanted to do a clip for this song a while back, but just didn’t feel like we had the right concept. Then after COVID hit, I stumbled across this amazing dancer named Rachel Coulson, who was filming herself on her iPhone and putting vids up on her Instagram to stay sane during lockdown. She has this really distinctive, emotive and uninhibited style that I thought would complement the song beautifully.”  Ed Prescott, Dust Of Us

Filmed in St. Leonards at Third Man Creative and directed by videographer Nicholas Langley, Coulson performs solo in a white room. Prescott explains that keeping the setting as neutral as possible ensured that the viewer’s focus stays on her performance. “We didn’t initially intend for it to be all one shot – we started out shooting different angles and planning cuts. But then at the end of the day, our videographer Nick set up a gimbal to do roving stuff and it just looked so great with him following Rachel closely as she moved, that we decided it’d be bolder as a single shot. She must’ve been absolutely exhausted by the end of the day – it’s an extremely physical performance to deliver in a full take – but if she was, she didn’t show it. A total pro.”
Ed Prescott, Dust Of Us

Releasing the music video for ‘7 Years’ is the first of a string of new material from Dust Of Us to take us through the rest of 2020. With their debut EP expected at the start of 2021, brothers Ed and Lloyd Prescott have two more videos and another single planned before the year ends.

Already, their work has garnered praise from online media as well as outlets including triple j, Double J,  Apple Music, Spotify, and 2SER.

“Brilliant. Hard to believe this is just the second release from this brotherly duo.”
2ser, Mick Rad

“Love how this develops over its course with some quietly sizzling energy. It’s a bit like LANKS meeting The xx.”
Dave Ruby Howe, Triple J Unearthed

“Reminds me of the first time I heard ‘Unfinished Sympathy’ by Massive Attack. Get in now for maximum bragging rights.”
Ryan Sahb, Radio Adelaide

‘7 Years’ is out now! Official Single Artwork Below 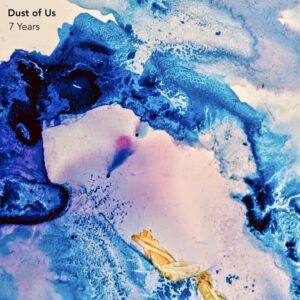