To celebrate emerging talent within the neo-soul and RnB scene, new Sydney based record label Soul Modern officially launches. Brought to life by the team behind Australia’s longest running independent dance label, Central Station Records and steered by experienced A&R, Archie Magliulo (Starley ‘Call On Me’, 4 x platinum),Soul Modern aims to cultivate a hub for emerging and rising talent from Australia and abroad within the soul sphere.

Archie elaborates on the vision behind Soul Modern, “Naturally we are very excited about the launch of our brand new imprint, Soul Modern. It’s exactly as the name suggests; a home for all things Soul, RnB and groove based music, using a modern twist. Within our flourishing Australian scene alone, there are so many soul-stirring new artists that we will be focusing on as we grow the label, stay tuned”.

For the debut release on the label, Soul Modern welcomes RnB artist, Wilsonn with the release of ‘Standing Floors’. The Sydney artist has been making waves with his charming and buttery vocals, drawing influence from the likes of Frank Ocean, Miguel, Daniel Caesar and H.E.R, making him a quintessential match for Soul Modern. Adding their RnB textures and groovy production to the vibrant new single, is Grammy nominated duo Christian Rich, who have produced and co-written records for the likes of Childish Gambino, Drake, Earl Sweatshirt, Lizzo and Kanye.

The single about persistence and never giving up, Wilsonn elaborates: “’Standing Floors’ was written for the Warriors of this world. The outcasts, the dreamers, the ones who take no for an answer, whether it be in struggles in personal life or professional life, The ones that are never afraid of failing to grow!  This song is for them, the ones who never give up!!”

Wilsonn’s infectious vocals began earning praise back in 2017 when he released his mixtape titled ‘Idiocentric’, which led the artist to be recognised by a number of major online outlets including The Music Ninja, EDM Sauce, and This Song Slaps. Turning heads within the Australian RnB scene, he’s gone on to further embed himself as an eclectic singer, songwriter and producer, releasing his debut single ‘Even If I Know’ in 2018, which scored blog support from Earmilk, EDM Sauce and Stoney Roads. Outside of his own singles, he’s continued to write records for various artists including Mau5trap artist Attlas for ‘Batch’ which went top #10 on Billboard electronic charts.

‘Standing Floors’ is out via Soul Modern 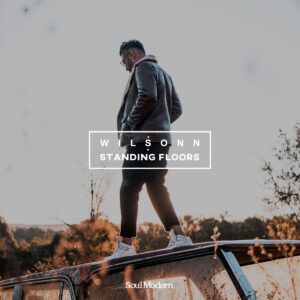