NEW SINGLE ‘EASY FOR U‘

Hailing from Melbourne Will Hyde is a new pop face about to take the world by storm. His new single “easy for u.”, from upcoming EP ‘with u in mind.’, is released today Wednesday 3rd June.

Watch ‘easy for u’ below

Will Hyde is also confirmed to be working alongside Creative Director Stefan Kohli, who is the creative mastermind behind Jeremy Zucker, and has previously worked with Mac Miller, Ariana Grande, LANY, Lauv, Trippie Redd, Iann Dior, Offset and more.

Sounding like cross between LAUV/Jeremy Zucker/Alec Benjamin/Why Don’t We.. But with a slightly edgier Rex Orange County or Dominic Fike or Gus Dapperton thing thrown in. There are huge things expected from this exciting new pop sensation and once you hear the ridiculously catchy new single ‘easy for u’ you will understand why. 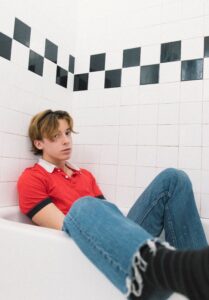 As a teenager in a producer duo project SŸDE, Will found early success to the tune of over 65 million streams and nearly 1 million monthly listeners on Spotify alone, including praise from triple j (including being 2017 Unearthed High finalists). However, as SŸDE’s profile rose so did Will’s detachment from the commercial beats behind his name. Fortunately, taking the risk to leave behind a fracturing relationship with his musical partner and bring SŸDE to a standstill would have its own rewards.

Now writing and performing his own music and no longer just producing, will hyde is finally able to flaunt his boisterous personality in a solo project that glides beyond genre or hype. His new music shines with texture and a relatable balance of joy and melancholy that his older production couldn’t evoke on its own.