Florida’s Wage War have shared the video for the acoustic version of the song “Grave” from their 2019-released third album Pressure, which arrived last summer via Fearless Records.

“This is a wild time for everyone, but we decided we would make the most of it and make a music video showing y’all what we’ve been doing to pass the time in quarantine. Enjoy our stripped down version of ‘Grave,'” says the band. While this rendition of the song demonstrates the depth and breadth of Wage War’s songwriting, the visual offers a look at how the band members have been spending their time while in quarantine during the COVID-19 pandemic. You’ll see homemade pizza-making, lots of fishing, a socially distanced game of front yard catch, and one member putting in a new floor in their house, among other things.”

The group’s 2015 debut, Blueprints, yielded multiple fan favorites with “Alive” cracking 12 million Spotify streams and “The River” exceeding 8 million to date. Meanwhile, 2017’s Deadweight established them as a rising force. Totaling nearly 50 million cumulative streams in two years, the single “Stitch” racked up 14 million streams on Spotify as Deadweight received widespread praise from Metal Injection, New Noise, Metal Hammer, and Rock Sound who dubbed it, “a relentless, genre-evolving treat.” Meanwhile, they toured alongside everyone from I Prevail and Of Mice & Mento Parkway Drive and A Day To Remember, logging countless miles on the road.

Wage War’s album “Pressure” is out now in Australia and New Zealand through Fearless Records/Caroline Australia. “Pressure” can be found now at https://lnk.to/wwpressure. 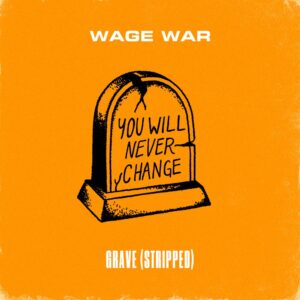