attracts an evening of vibrant Australian talent to

In the thriving hub of a world heritage listed Parramatta Park, Summer Sundown will see live music return to The Crescent in Parramatta Park on Tuesday, January 25th 2022.

Music fans, families and groups of all ages will be welcomed back for a glowing Sydney summer evening, featuring an array of exceptional homegrown talent, including; SAFIA, Touch Sensitive, Alice Ivy & Clypso. The event is a family friendly affair, presented by the City of Parramatta Council in partnership with Live Nation, and Greater Sydney Parklands.

Australian darlings SAFIA lead the lineup with their rich, electronic woven, sonic landscapes; capping off a 2021 that saw them hit festivals Wildlands Weekender, Castaway, Now & Again and Bass In The Grass, alongside the likes of Missy Higgins, Tones & I, Hermitude & Ocean Alley.

Sydney’s own synth-driven visionary & style icon Touch Sensitive will also take to the stage, marking a year that saw him dominate streaming platforms, with over 14 million spins across his catalogue. Renowned collaborator and ARIA-nominated producer Alice Ivy performs earlier in the evening, bringing her eclectic soul-influenced, electronic-pop sound to soundtrack the clear evening, whilst Sydney-based producer and vocalist CLYPSO will open proceedings with her tropical inspired electronica.

For the artists involved Summer Sundown will be some of the first opportunities they will have had to perform since early 2021. The return of live music around the country is one many fans and artists alike have been hanging out for. Summer Sundown promises to be an enjoyable summer evening of entertainment and music for City of Parramatta residents and visitors alike.

“It’s been over 2 years since we’ve had the opportunity to perform in Greater Sydney so as you can imagine we are extremely excited to just get out there & play! People can expect big production, loud sing-alongs & 3 guys who’ll just be happy to do what they love again!”

“When I saw Parramatta in the initial email re this show I was super pumped. I grew up not too far from there, hanging out as a kid. It was the city away from the city, so I grateful to be part of it. I wish that there were things like this when I was there so it’s good to be able to come back”

“Stoked to be playing Summer Nights in Parramatta next month! I’ve been working super hard on a brand new set that will keep you dancing. Live music is back baby!”

Parramatta Park’s spectacular outdoor venue, The Crescent is one of Sydney’s most sought-after major outdoor event spaces. Having played host to incredible events such as MTVs Beats & Eats, Harvest Festival, FOMO & Tropfest over the years, it forms a natural amphitheater along Parramatta River – the perfect host to Summer Sundown.

“As a longstanding cultural and entertainment hub, the City of Parramatta has a proud reputation for

Summer Sundown concert to the list. I look forward to welcoming residents and visitors back into our city in January for a spectacular evening of live music at the beautiful World Heritage-listed Parramatta

Tickets for Summer Sundown are on sale through Moshtix from 12.00pm AEDT.

For more information on how to access the park via public transport or car, visit Parramatta Park’s website. 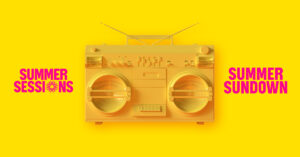