BROS: AFTER THE SCREAMING STOPS

Back by popular demand, the cult hit documentary has been scheduled for an encore screening in Australia on SBS VICELAND on Sunday, 16 January 2021.

The 3 x BAFTA nominated and award-winning documentary, Bros: After the Screaming Stops originally premiered at the London BFI Film Festival in 2018 to huge acclaim and rave reviews from the media and fans alike. It instantly received a 100% rating from Rotten Tomatoes and became a viral sensation after it aired in the UK on BBC4 to over 2M viewers and has since been viewed 20M times.

The story of Bros is one of immense success, immeasurable fame, unprecedented highs and truly devastating lows. It is one of tragedy, triumph and heartbreak, of noise and youth, silence and reunion. It is the story of brothers bound together by blood and music, taking on the world and making a reality out of their dreams.

In 1989, Bros, led by identical twins Matt and Luke Goss, took the world by storm with their catchy songs and good looks, bringing about a level of mania that had not been seen since The Beatles. Bros were everywhere: their debut album ‘Push’ has sold 10 million copies worldwide, and their singles were Number One in over 20 countries, with their biggest hits being ‘When Will I be Famous?’ and ‘I Owe You Nothing’. Bros were the only band to appear in every issue of Smash Hits from 1988 to 1991.

Produced by international production company, Fulwell 73, the home of The Late, Late Show with James Cordon, Carpool Karaoke, I Am Bolt and Hitsville – The Story of Motown with Berry Gordy, the critically acclaimed documentary stunned audiences around the world.

Bros: After the Screaming Stops is an explosive rollercoaster of emotion and follows the long-awaited reunion of the 80s pop sensation Bros. After decades of being estranged, twin brothers Matt and Luke announced they would reunite for a comeback gig in 2017, 30 years on from their last concert.

“The documentary was challenging for both of us, we questioned doing it because we are both so private and had been represented by soundbites throughout our careers.  We agreed to go ahead because we were both established in our own rights and as twins, we privately pine our own individuality even more so. It allowed us to get things off our chests, but I hope it also corrected some of the misconceptions about us that were radically inaccurate.” Said, Matt Goss.

Shot over 12 weeks in the build-up to the boys’ comeback gigs at London’s O2 Arena, Joe Pearlman and David Souter’s documentary is a jaw-droppingly unfiltered look at two estranged siblings attempting to reconnect. The film resonated with a wide audience and generated a plethora of new fans, rather than being solely about their music, it focused on the primal tensions of sibling rivalry and the imperfections of familial love.

‘The Best Music Documentary of All Time’ GQ Magazine

‘Bros: After the Screaming Stops is one of the best music documentaries of all time. A must-watch’ NME Magazine

‘Bros: After the Screaming Stops – Goss breakdown is the best music film since This Is Spinal Tap’ iNews

‘It is both deliberately hilarious and unintentionally so, as tragic as it is funny and as frank a portrait of fickle fame as you’re ever likely to see… this is one of the best music documentaries I have seen in a long time.’ The Guardian

Forget everything else. If you haven’t seen Bros: After the Screaming Stops Documentary, You Need to Know! – BBC News 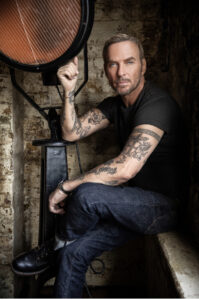 Bros: After the Screaming Stops will air on SBS VICELAND