Long Island hard hitters Stray From The Path have unleashed a monster new single and video in the form of ‘Actions Not Words’. Recently, Kerrang! joined the band in the studio to discuss the making of the track, which is now available to view in the latest entry of Will Putney’s Art of The Record series. Watch HERE.

It comes ahead of the release of Stray From The Path’s full-length album Internal Atomics, which drops on Friday November via UNFD.

CLICK BELOW TO WATCH THE ‘ACTIONS NOT WORDS’ MUSIC VIDEO

Opening with a punishing barrage of drums and distortion before kicking into signature-Stray groove-laden riffs, ‘Actions Not Words’ harnesses the band’s frustrations at inaction towards inequality. Lyrically, the track is directly inspired by the band’s experience working alongside humanitarian organisations including Actions Not Words and Hardcore Help.

In 2018 the band teamed up with the organisations to raise funds for water filters for villages outside Nairobi, Kenya. After travelling there to help install the filters and meet the community, an experience that would prove to be as shocking and indescribable as rewarding, the band were even more committed to spreading their message of “actions, not words”.

“What touched us the most from this experience is that Rico from Hardcore Help and Ross from Actions Not Words had dropped everything they had and made this their life. They saw people in need and they took action to make a difference,” the band says.

“People, including us, are guilty of complaining about things that are insignificant once you experience something like the community we saw. Now, it doesn’t take something as extreme and die hard as dropping everything in your life to move to Africa to make a change. True change can start anywhere with doing our best to make sure people have what they need to survive.”

Stray From The Path will tour worldwide in support of Internal Atomics, including a North American tour with Counterparts, their biggest UK/EU headline shows to date with support from The Devil Wears Prada, Gideon, and Loathe and playing UNIFY Gathering in January. 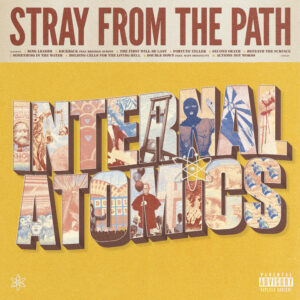