Melbourne’s chaotic metalcore four-piece Starve have stormed onto the scene with their first offering of 2020, “Shiver”. The band will unleash the brand new single live at AM//PM nights in Melbourne and Adelaide supporting Dealer early February!

Recorded, mixed and mastered by Scottie Simpson (Alpha Wolf, Polaris, Gravemind), “Shiver” demonstrates pure brutality and solidifies Starve as a band to watch in the new year. “Shiver” is about feeling disconnected from yourself, falling into toxic patterns and being unable to remove yourself from those unhealthy situations. Vocalist Jordan Dunbar explains the theme and the fallout in saying that “Even when your instincts are telling you no, you’re still too afraid to do anything, and ultimately end up blaming yourself for your own depression.”

The video is shot, directed and edited by Martin Wood Imagery assisted by Jayden Pitts. The clip shows the band playing through their new track with passionate aggression and an unstable video style that compliments the tension of the track. “Shiver” contains an underlying deep driving force that leads the way through this chaotic maze of angry riffs, scathing vocals and static sounds that marks the start of a new era for Starve.

he band began their year strong, opening for Stray From The Path on their sold out Unify Gathering side show alongside hardcore legends Kublai Khan TX and Brisbane favourites Deadlights. Keeping the ball rolling, Starve join the stacked AM//PM lineups supporting Dealer Friday February 7 at Adelaide’s Jive Bar alongside local talent in Relapse and Heartline (tickets available at Moshtix) and Saturday February 8 with friends in Earth Caller and The Gloom In The Corner at Deluxe Bar Melbourne (tickets available at Eventbrite).

Releasing their debut EP ‘Mantis’ in early 2019, Starve have given themselves a year to create the next installment with the aim to deliver more chaos in 2020. Dunbar says “our music comes from experiences and feelings that we take and turn into the manic, angry and intense sound that we pride ourselves on. With influences all across the board, our band aims to deliver something different and something people can relate to.”

Starve’s new single “Shiver” is out now on all online stores and streaming platforms. 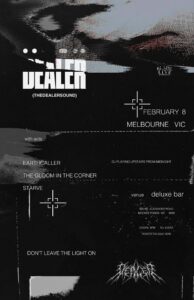