Frontman Ben Stewart shares that the track was loosely inspired by the story of an acquaintance and his fiancé who passed away from drug addiction issues.

“Despite the self-destructive loop they found themselves in, I could see they maintained an unbreakable adoration for each other,” he says.

“I think there is something tragically beautiful about the love between people who are burdened with a self destructive predisposition…I was really inspired not by the circumstance of their passing, but by their beautiful love for each other – it was palpable and timeless in an almost “Romeo + Juliet” like fashion. It’s yet another song for the pile of ‘love conquers all’.”

Stewart explains that the track title stems from the conversation taking place between the couple throughout the lyrics.

“The chorus lines dictate a broken, vague conversation they are having amidst hallucinations as they sit at home (“you kind of look a comet burning out to impress all the stars you hate”), yet it’s interrupted by sweetly close gestures between them, though perhaps incoherent to the outside world (“hey wait, I need to stroke your face…the neighbours hear us as we talk like zombies”), demonstrating how the outside world has such a different perceptions of those moments.”

‘Comets & Zombies’ comes after Slowly Slowly rapidly sold out 4 solo nights at Melbourne’s Corner Hotel last week, due to take place in January. With shows now added in Sydney & Brisbane, the performances will feature Stewart performing old and new Slowly Slowly favourites in an intimate acoustic setting, and mark fans’ first chance to hear tracks from the band’s latest album live ahead of its rescheduled national release tour in June 2021.

Featuring slow-burners like ‘Suicidal Evangelist’ and ‘How It Feels’, the explosive and defiant title track and stadium rock choruses on ‘Creature Of Habit’, ‘Michael Angelo’ and more, Slowly Slowly released their third album Race Car Blues in February to an acclaimed response. Beyond taking out the coveted triple j Feature Album slot, global reviews classed the album as a staggering, no-holds-barred, even “faultless” (Wall Of Sound, 10/10) win, with the likes of Kerrang! commending its “engaging heart-wrenchers… catchy choruses [and] penetrating emotional insight.”

Stream Race Car Blues in full now and keep up to date with the band’s socials for more to come. 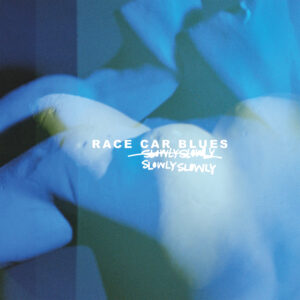 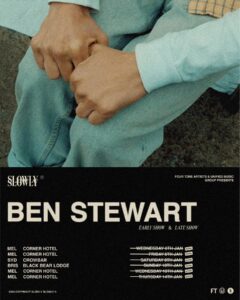