Emma Swift’s acclaimed album Blonde On The Tracks is now available across all digital platforms!

A collection of Bob Dylan covers that perfectly captures the depth of Swift’s talent as a performer and her gift for reinterpretations, Blonde On The Tracks has become a defining moment in her career.

Finding solace in Dylan’s work as she navigated a period of personal and creative depression, Swift was able to regroup and produce an album that honours the timeless nature of Dylan’s catalogue, while also centering the music very much in her own vision. Produced by Patrick Sansone (Wilco), Blonde On The Tracks shines in its intimacy and individuality.

“It was hard to get out of bed and get dressed, and present to the world as a high-functioning human. I was lost on all fronts no doubt, but especially creatively. With a bad case of writer’s block and no songs of my own to record, I turned to Dylan’s music to reinvigorate my life force. And it worked. To use one of his lines, he got me out of a jam.” Emma Swift

The digital release of the album comes accompanied by three bonus live versions of songs recorded at the iconic Blackbird Studios in Nashville, with Robyn Hitchcock on guitar and Ryan Brewer on piano.

Released initially as a physical exclusive record in August, Blonde On The Tracks landed with impact, drawing global praise for her interpretations and delivery of Dylan’s originals. In Australia, the album debuted at #9 on the ARIA Album Chart and at #1 on the ARIA Vinyl Chart; while impressively, the album sat within the Top 15 of the AIR Chart for 13 weeks.

Internationally, Blonde On The Tracks achieved the #13 spot on the UK Americana Chart, while attracting positive reviews from noted outlets including Rolling Stone, Uncut Magazine, The San Francisco Chronicle and more. 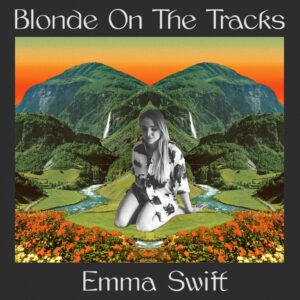 In today’s current music climate, the decision to initially withhold Blonde On The Tracks from the streaming services was an unorthodox choice for Swift to make. Yet as it has proven, when the music is this good, success will follow regardless.

“It’s extremely rare for musicians to withhold their songs from streaming services, but given that I lost my touring job at the beginning of the year due to COVID, I wanted to see if music lovers still bought albums; and it turns out they do. I wouldn’t have an ARIA Top Ten album if they didn’t.” Emma Swift

The exclusive physical release of the album spoke to Swift’s long love of the classic album format, but now it’s time for audiences everywhere to be able to connect with the album and in doing so, connect with Swift’s gift through these inspired re-interpretations.

“Nobody has ever sung Dylan quite like Swift. And maybe nobody (other than Dylan) has ever sung him better either…It’s a beautiful piece of work by a singer with a rare interpretive gift.”
The Guardian, Andrew Stafford

“…an album for our times. It has origins in the pandemic and although perhaps not a vaccine against it, it will sure help until one gets here. It’s a joy from beginning to end…”
The Irish Times, Tom Dunne

“There’s a purity to this collection that allows both Dylan’s poetry and Swift’s emotion to shine; she embodies tracks like ‘Simple Twist of Fate’ in a way that makes it feel like she wrote it herself.”
The San Francisco Chronicle, Robert Spuhler

Blonde On The Tracks is out now!!