In early 2021 Midnight Oil will perform a handful of special outdoor concerts called Makarrata Live. At each show, the band will be joined on stage by an incredible line up of First Nations collaborators for a unique concert event featuring music from their #1 mini album The Makarrata Project plus iconic Midnight Oil songs of Reconciliation from throughout their career.

These gigs will seek to elevate The Uluru Statement From The Heart which calls for a Makarrata – or “truth telling” – to account for the theft of lands and displacement of First Nations people. The shows will take place in strict accordance with each state’s Covid19 protocols. Due to the huge logistical challenges involved, these events will only be staged at one venue in SA, QLD, NSW, VIC & ACT making them each a unique live experience. The band is aware that many fans will be disappointed that the tour is visiting such a limited number of locations but Midnight Oil will tour in their own right later in 2021 by which time large indoor shows can hopefully be staged safely and without compromise throughout Australia and New Zealand at least.

Makarrata Live will be previewed at Sirromet Wines (near Brisbane) on Sunday 28February, before its official world premiere on Monday 8 March at WOMADelaide in South Australia (at which the band will also perform a one-off headline performance on Saturday 6 March). The Makarrata Live dates will then follow on at Hope Estate in theHunter Valley on Saturday 13 March and Canberra’s Stage 88 on Wednesday 17 March before a grand finale at Geelong’s Mt Duneed Estate on Saturday 20 March. For full tour and ticketing info see below.

“We’re relieved and excited at the thought of finally playing music to live audiences again”, said Midnight Oil frontman Peter Garrett. “Lots of the songs which have struck the deepest chords with our audiences over the years, like Beds Are Burning, Jimmy Sharman’s Boxers, The Dead Heart and Truganini, revolve around Indigenous issues so we’re definitely inspired to be playing a set that combines older songs like those with newer songs that share similar lyrical themes.”

“The most fulfilling part of The Makarrata Project came through collaborating with so many First Nations artists during those recording sessions”, adds the band’s guitarist and keyboard player, Jim Moginie. “I think everyone’s looking forward to seeing what shape all the music from different eras takes as those gifted singers add their voices to it live. We’ve never done anything like this so it feels good to still be pushing the envelope a bit despite everything that’s happened in 2020.”

Midnight Oil originally planned to play some Makarrata Live concerts earlier this year including a headlining slot at Splendour In The Grass. Those plans were unfortunately delayed by Covid19 and were then thrown into doubt by the harrowing terminal illness of long-time bass player, Bones Hillman. However, Bones urged his bandmates to proceed with these live shows to help draw focus to the new recordings the group had all made together late last year. In fact, just a few hours before his tragic passing he received confirmation that The Makarrata Project had debuted at the top of the ARIA Album Charts. It was Midnight Oil’s first new music #1 since Hillman’s very first record with the band, Blue Sky Mining, way back in 1990.

“Bonesy leaves giant shoes to fill but we’ll need to find a new bass player for this tour”, said drummer Rob Hirst. “On this issue Bones was clear: ‘the show must go on!’, he said, ‘as soon as it’s safe to play gigs again’. We’re hoping that these Makarrata Live shows will increase awareness of The Uluru Statement From The Heart and further the reconciliation between First Nations and non-Indigenous Australians, we’ll also be dedicating the tour to Bones.” 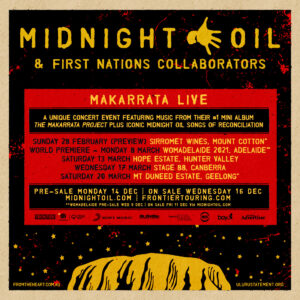 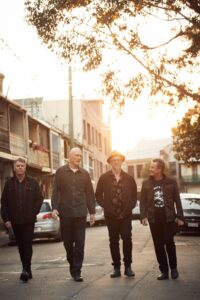 “It’s thanks to an extraordinary combination of artists that The Makarrata Project has been elevated beyond the individual talents of this singular band of thinkers and feelers into something truly meaningful, momentous and far sighted.”
– Andrew McMillen, The Australian

“Albums commanding as much interest as The Makarrata Project are few and far between and the Oils have seized upon the “unfinished business in Australia”, as Peter Garrett recently called it, to put The Uluru Statement front and centre.”
– Martin Boulton, Sydney Morning Herald/The Age 4.5/5

“It’s not a moment too soon for the veterans of Polemical pop to return… the music hits hard.”
– Johnny Sharp, Classic Rock Magazine (UK) 8/10