NEW SINGLE ‘WAKE ME UP

(WHEN THIS NIGHTMARE’S OVER)’

In light of the recent crisis in Ukraine, multi-million selling and streaming rock band Simple Plan is offering support to the people of Ukraine with their new single ‘Wake Me Up (When This Nightmare’s Over)’. The new music video was directed by Ukrainian filmmaker Jensen Noen and was filmed with a Ukrainian cast and crew. VFX and post-production work was also performed by Ukrainian artists. Jensen Noem also directed the band’s recently released clips for their singles ‘The Antidote’ and ‘Ruin My Life.’

‘When we saw the first images from the war in Ukraine, we felt so heartbroken and powerless. The impact on young children and families felt especially devastating and made us want to do something to help.The idea to do this video was sparked by discussions with our good friend and director Jensen Noen. We could feel just how important and personal the events in Ukraine were for him and from there, the concept for the video emerged.

It was very special to see all these talented Ukrainian actors, actresses, and crew members come together for this cause and create such a moving and emotional music video. We always believed in the power of music and we hope this video can have a positive impact and raise as much money as possible for the people of Ukraine.” Says Simple Plan

Director Jensen Noen adds, “Since the war started, I’ve gone through a range of emotions: From depression to rage to an overwhelming sense of helplessness. I can’t describe what it’s been like to watch my home country being torn to shreds, its people raped and killed, innocent children and civilians dying every day…Many of my family and friends have already been affected by the war.

To be able to help raise awareness and money for this cause and use my art to help tell the story of my people means the world to me. And the fact that I got to work with a mainly Ukrainian cast and crew, made this whole experience even more special.

I’m so grateful to Simple Plan for giving me an opportunity to tell the story of what’s going on in my country and to all of our incredible cast and crew that donated their time to this cause.”

Watch the video for ‘Wake Me Up (When This Nightmare’s Over)’ here:

With this new video, the band hopes to raise awareness and funds for those affected by the war in Ukraine. All money generated by Youtube views will go directly to Ukrainian relief efforts, through the UNICEF Ukraine Emergency Appeal. In addition, the group is pledging to donate a portion of the proceeds from tickets sold throughout the current tour, via its own Simple Plan Foundation.

The group is collaborating with Ukrainian organizations – Canada-Ukraine Foundation and Ukrainian Congress Committee of America (UCCA) – to help amplify the video and its fundraising efforts for Ukraine.

Watch the touching behind-the-scenes video for ‘Wake Me Up (When This Nightmare’s Over)’ here:

‘Wake Me Up (When This Nightmare’s Over)’ comes from Simple Plan’s highly anticipated new album ‘Harder Than It Looks’, set to be released on May 6th, 2022. Pre-orders for the album, which features previous singles ‘The Antidote,’ ‘Ruin My Life,’ and ‘Congratulations,’ are available now at https://orcd.co/harderthanitlooks.

Fans can look forward to hearing new music live this spring as Simple Plan hits the road for the Blame Canada Tour with Sum 41. The first leg kicks off on April 29th and will feature support from Set It Off. The second leg featuring Magnolia Park starts on July 29th.

‘Wake Me Up (When This Nightmare’s Over’ is out now.Pre-orders for ‘Harder Than It Looks’ are available here. 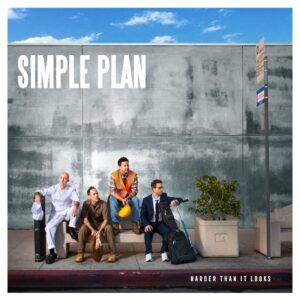 HARDER THAN IT LOOKS TRACK LISTING:01. Wake Me Up (When This Nightmare’s Over)02. Ruin My Life (feat. Deryck Whibley)03. The Antidote04. A Million Pictures Of You05. Anxiety06. Congratulations07. Iconic08. Best Day Of My Life09. Slow Motion10. Two

Simple Plan:From their new millennium rise to MTV superstardom through pop-punk’s modern resurgence that has introduced their iconic, multi-platinum sound to new audiences around the world, Simple Plan have been an indelible part of pop culture for more than two decades because they’ve never lost sight of what got them there in the first place: their fans.

The quartet, formed in Montreal in 1999, enjoy the rare sort of artist-audience dynamic that’s never dulled over time–if anything, it’s only grown, as both the band and their fans have learned that life as outsiders is anything but lonely.

Free agents for the first time in their storied career, the band kept their circle tight during the recording process, enlisting longtime songwriting partners like We The Kings’ Travis Clark and producers Brian Howes and Jason Van Poederooyen (who worked on the band’s 2011’s album Get Your Heart On!) and Zakk Cervini (blink-182, Good Charlotte) to be part of the 2019 sessions. Bouvier himself even got in on the action, receiving producer credit for the first time after years of meticulously crafting the band’s demos.

In a time when artists are more in control of their careers than ever before (“No one is ever going to care more about the band than we do,” Comeau says proudly), the sense of freedom the quartet enjoyed while making the album let them follow their own convictions: No looming deadlines, no pressure from external forces to deliver anything other than the record they wanted to make. In doing so, they rekindled a spark they didn’t know was missing.

“Throughout our career, it’s taken a while to be mature enough to understand that our sound is an asset, not a liability,” Bouvier says. “On this album we said: ‘Let’s just embrace who we are and not be afraid to do w

Thus, HARDER THAN IT LOOKS: an album title that, true to form, elevates the adolescent joy hard-coded into Simple Plan’s DNA since day one while at the same time reinforcing a sense of self-awareness that’s guided them through a career full of ups and downs.

“We feel so lucky to be a band with fans who love our old and new material,” Comeau says, noting 2022 marks the 20-year anniversary of their debut album No Pads, No Helmets…Just Balls. “We’re very proud of our past, but we’re even more excited about the future. We’re still ambitious, driven and curious to see what the next 20 years will bring. We truly always feel we’re 3 minutes away from the best or biggest song of our career.”