Ivy League Records are extremely proud to announce the signing of Shannen James!  The Melbourne artist is the latest addition to the Australian label’s stellar roster of artists, alongside The Teskey Brothers, Hatchie, Rolling Blackouts Coastal Fever, The Rubens, A. Swayze & the Ghosts and more.

Shannen James today releases her stunning new single & video,  ‘Collide’ – the follow-up to her 2019 debut, ‘Something In The Water’. ‘Collide’ received its world premiere on triple j Good Nights with Bridget Hustwaite last night, which followed the exciting news that Shannen has been crowned triple j Unearthed’s Feature Artist next week!

Collide is an intoxicating blend of syncopated beats, uplifting instrumentation and cathartic, sing-along hooks, all brought together and made even sweeter with Shannen’s undeniably lush vocals.  Drawing inspiration from friendship as much as romantic love, Shannen tells a classic ‘opposites attract’ tale that is as irresistible as it is relatable. In Shannen’s own words:
“Collide is a song about connecting with someone that is exactly that, the polar opposite to you in every way. I think the beauty of it is that it can be related to all kinds of relationships we have in our lives. At the heart of this song is the idea that you can love another even if they are different from you and that regardless of those differences, there is a common ground of love and an undeniable connection and attraction.”
Ivy League’s A&R Manager Marihuzka Cornelius says of the signing:
“Shannen is one of the most hardworking and talented songwriters I’ve ever met. When we signed her, she had just finished writing 30 killer songs in a period of only three weeks – out of which both ‘Something in the Water’ and ‘Collide’ came from.

Ivy League has always been a songwriter’s label and we feel that Shannen encapsulates everything that makes a songwriter great. We are so excited to be working with an artist as talented as Shannen James.”

Recorded with up-and-coming producer and good friend Dylan Nash (Dean Lewis, Angus and Julia Stone) in a home studio on the outskirts of Melbourne, ‘Collide’ is Shannen’s second single, following the release of her debut ‘Something in the Water’ in 2019. ‘Something In The Water’ was embraced by listeners, radio & streaming platforms – with adds across triple j, triple j unearthed and to-date, over 600,000 Spotify streams. The end of 2019 saw Shannen support artists such as G Flip, CLEWS & more – while 2020 will see her support Canadian band Men I Trust in February across Sydney, Melbourne & Brisbane. 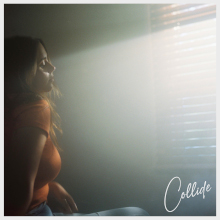