Shangrila are back with their infectious second single, “Waiting”, pulled from their upcoming sophomore EP, ‘Analog Youth’, due out Friday August 27.

The band flaunt their addictive, Trophy Eyes-esque melodies and sound with “Waiting”. Produced by Shane Edwards of Karma Sound Studios (Trophy Eyes, Hellions) with additional engineering and production by Cody Brooks, “Waiting” marks the second to drop from ‘Analog Youth’, a five track EP created to reflect on memories and emotions moving through youth into adulthood.

Inspired by a touch of internet envy and the drive to be better, “Waiting” occupies a more upbeat, fun place on ‘Analog Youth’ complete with a string section and a bouncing chorus. Vocalist Devyn Juppexplains, “the lyrics in ‘Waiting’ were written whilst having one of those “Where has all the time gone?” panic moments you get when you’re in your 20s.”

“It’s so damn easy to get caught up in what people are doing on social media these days, and although seeing people doing all these amazing things and kicking big goals is great, it can also be really disheartening when you reflect on your own accomplishments, which may not stack up to these grand illusions on the internet. It starts to make you question all the time you’ve wasted not pursuing bigger things. This song is about going through those scenarios and ultimately finding that goal you want to reach and saying “Screw everything and everyone who’s going to get in my way, this is what I’m doing”

Similarly themed, previous single “Lift Me Up” tackled the different facets of life as we grow older and discover who we are, exploring what we stand for and the impact of our decisions and actions on others. Premiering on triple j Short. Fast. Loud, the single has raked in tens of thousands of Spotify and YouTube streams and occupied a spot on triple j Unearthed rotation. Hailed as an “unbeatable rock anthem pouring a fountain of hope over its melodic waves of rocky beats” by Wall Of Sound and “tonally rich” and “smooth-as-hell” by KillYourStereo, the first two singles are a solid representation of what’s to come on ‘Analog Youth’

Shangrila is Devyn Jupp (vocals), Jackson Macleod (guitars) and Dan Harper. With a band history stretching back almost a decade, the evolution of Shangrila is one that has been constant and ever intriguing. The release of their debut EP ‘Love and Leaving’ and subsequent headline dates and shows supporting the likes of Trophy Eyes and Gyroscope proved the perfect introduction to the band’s new sonic path, one that was well-released by industry and their fans alike.

“Waiting” and “Lift Me Up” are available everywhere now. ‘Analog Youth’ will be available Friday August 27. Official EP artwork below 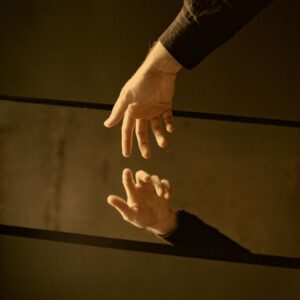