AHEAD OF AUS TOUR WITH ONE OK ROCK

Set It Off have just shared another unreleased B-side. Listen to “One Single Second” here.

“For this song, I brought myself back to one of my worst memories of relationships I can remember — the first time I got cheated on by my first love,” says singer Cody Carson.

“The entire song is basically telling the story of how I felt the connection fade and started putting the pieces together. It’s got that angst, that aggression, that mysterious feeling of ‘Do I know for sure?’ ‘Do I not know at all?’ I think a lot of you have been betrayed like this before and this is the song you can hold onto to let it all out.”

The band previously shared two unreleased B-sides:
Listen to “Catch Me If You Can” here.
Listen to “So Predictable” here.
Set It Off will travel across the ocean to play support for Japan’s rock heavyweights ONE OK ROCKon the Eye Of The Storm Australia Tour alongside Brisbane’s own pop-punk superstars Stateside. The tour kicks off Monday March 2 at HQ in Adelaide before making its way up the East Coast, hitting Melbourne’s Forum Theatre on Wednesday March 4, Sydney’s Enmore Theatre on Saturday March 7 and finishing up at Eatons Hill in Brisbane on Tuesday March 10. Tickets available through Destroy All Lines!
Set It Off released ‘Midnight’ in 2019 to much acclaim. ‘Midnight’ was produced by Mike Green(Neck Deep, All Time Low, State Champs) with additional production by Brandon Paddock(Panic! At the Disco, Papa Roach, The Used, Daughtry). The album demonstrates a depth and breadth of musicianship, as the band incorporated live strings, live horns, and a live gospel choir into the album. ‘Midnight’ also includes intricate, instrumental features by Reel Big Fish‘s Matt Appletonand Issues‘ Skyler Accord, as well as a vocal feature by Wayfarers.
Check out “Killer in the Mirror,” “Midnight Thoughts,” “Dancing With the Devil,” and “Hourglass.”

Set It Off’s B-side “One Single Second” is out now in all good digital stores and streaming outlets.
WATCH ‘ONE SINGLE SECOND’ HERE

ONE OK ROCK
EYE OF THE STORM AUSTRALIAN TOUR DATES 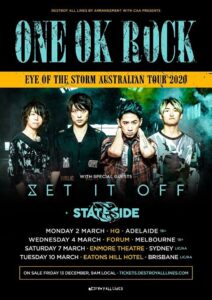