TAKEN FROM THEIR HIGHLY ANTICIPATED

NEW ALBUM, THE DEATH OF ME OUT FEBRUARY 21

“There are moments of depth and cleverness that will warrant repeat listens and the explosive presence of the band is undeniable. This is the music people create that rattles your heart and then some.” – Hysteria Magazine, 9/10

“On The Death of Me, the band has used their talent to position themselves at the top of the Australian metal hierarchy. Next step: world domination.” – Blunt Magazine

“Yes, the songs on this are very strong, memorable and dynamic, the musicianship is tight and the production is punchy as hell.” – themusic.com.au, 4/5

“It will be the album that many will look at in the future and reminisce about the impact it had on the Australian Music Industry.” – Insert Review Here, 10/10

As the excitement rises and the countdown begins for the release of Polaris’ second studio album, The Death Of Me, out next week on February 21 via Resist Records, the band reveal their heaviest song to date, Landmine. Landmine is a song that faces that mid-20s realisation that the universe doesn’t owe you anything and you’re going to have to fend for yourself.
“I think we all reach a point sometime in our late adolescence or early adulthood where we finally realise the world doesn’t just exist to serve us as individuals, and never did. A realisation that maybe you’re not as special and unique as you were made to feel as a kid – you’re not the star of everyone’s movie, only your own little life. Ultimately no one else cares if you succeed or fail, and no one is going to keep picking you up and dusting you off and pointing you in the right direction when you screw up. “Landmine” is a nihilistic, sarcastic celebration of accepting all of that.” Explains Daniel Furnari.
He adds, “This track was born from a handful of riffs that were programmed into a laptop on the plane trip over to Europe a little over a year ago, when we were about to start our tour with Architects. Initially it was just an experiment to see what I could do with some new plugins I’d bought, but we added a couple more ideas to it throughout the tour, and when we got home and started expanding on those ideas it became “Landmine”. We were all pretty thirsty for something we could bang our heads to at that point, and what resulted was one of the heaviest tracks we’ve written to date.”
An insane Mission Impossible inspired video accompanies the song. “This music video was conceived by our good friend Chris Elder, who has worked on a couple of our videos in different roles. This time though, as well as having him film, direct and produce, we really gave him the reins creatively to a story unlike anything we’ve done in a video before. “Landmine” is a destructive, violent, high-adrenaline track, and Elder’s concept really brought that to life with some good old fashioned action-blockbuster violence. It was ambitious, to say the least! This video shoot included an abandoned abattoir (which was kind of terrifying); an island location used in Mission Impossible II; and a qualified firearms supervisor (yep, those are real blanks being fired).
Honestly, I’m still baffled at some of the stuff we were able to capture on camera for this video!” says Daniel Furnari.
Watch the music video for Landmine here:

It’s been two years since Polaris released their ARIA-nominated, Top 10 debut, The Mortal Coil which introduced the group to legions of fans around the country and, thanks to an extensive international touring schedule, the world. When it came time to making their new album, The Death Of Me, the Sydney outfit knew they had a tall order on their hands.

Polaris returned to the house in the small South Coast town of Mollymook where they made The Mortal Coil, converting it into a temporary studio. The familiar surrounds acted as something of a refuge after the high-pressure claustrophobia of touring.

Accompanying the band was their front of house sound engineer, Lance Prenc, and long-time friend Scott Simpson (of Melbourne band Alpha Wolf), both of whom co-produced the album with the band.

In the two years since The Mortal Coil, Polaris embarked on three sold-out headlining tours of Australia, as well as supporting Architects and Parkway Drive around the country; five runs throughout Europe (including a series of arena shows supporting Architects and a slew of high-profile summer festival spots); three separate US tours; not to mention performing at the Download Festival and Unify Gathering in Australia. Somewhere in there, the quintet found time to write The Death Of Me.

The Death Of Me is available for pre-order HERE 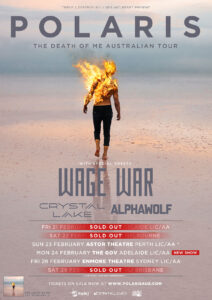 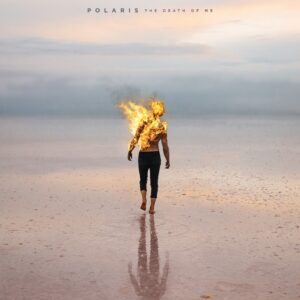