TAKES LISTENERS ON AN UNFORGETTABLE ADVENTURE

Throughout his storied career, music legend Carlos Santana has amassed an iconic body of work by pioneering a unique fusion of rock, Latin and jazz. On his upcoming album, Africa Speaks, to be released June 7, 2019 on Concord Records / Caroline Australia, the Rock and Roll Hall of Fame guitarist goes deeper and further than ever before. Inspired by the sounds and rhythms of Africa, the virtuoso musician has created a truly memorable and powerful experience that also promises to be one of his most groundbreaking albums yet.

For Santana, the inspiration for Africa Speaks holds a special significance. “This is music that I hold so dearly, and it’s not a stranger to me,” he says. “The rhythms, grooves and melodies from Africa have always inspired me. It’s in my DNA. If you take your inspiration from many, it’s called research. I researched this beautiful music from the African continent. They have a frequency that’s all their own. It’s funny, because when I play in Africa, people say, ‘How do you know our music?’ And I say, ‘How can I not know what I love?’”

To fully realize the breadth of the music on Africa Speaks, Santana knew that he needed to work with another outside-the-box thinker, and he enlisted iconoclastic producer Rick Rubin. “Before I even shook hands with Rick, I said, ‘This is going to blow his mind,’” Santana recalls. “I knew he’d never done anything like this.” When Rubin listened to the demos, his reaction was immediate and effusive: “He called me and said, ‘These songs are like gateways to people’s consciousness,’” Santana says.

The master guitarist and his eight-piece band (which also includes Santana’s wife, Cindy Blackman Santana, on drums), convened at Rubin’s Shangri La Studios in Malibu, and in a joyous and stimulating 10-day period they recorded an astonishing number of tracks, many of them in one take. “I’m not bragging or boasting,” Santana says, “but we recorded 49 songs in 10 days – killer, vibrant, dynamic, exuberant African songs that moved and inspired me. If Miles Davis or John Coltrane were in the room and they watched this music go down, they would be like, ‘Damn! How did you do that?’”

On working with Rubin, Santana raves, “He was very gentle and unobtrusive. His spirit was never an imposition. He trusted the process and how I wanted people to dance and feel in a way that’s totally different.”

Another dramatic element in the creation of Africa Speaks came in the form of Spanish singer Buika, whose heavenly lead vocals cast a magical spell throughout the album. “People are going to be blown away when they hear her,” says Santana. “She’s got Nina Simone, Etta James, Tina Turner, Aretha and more rolled into one.” The guitarist was so taken with the Latin Grammy Award winner that he asked her to write lyrics to his new compositions. Santana recalls, “Buika told me, ‘I wrote lyrics and melodies I’ve never done before. I was crying and laughing. The music possessed me to create something outside of the realm that I know.’ I said, ‘Yeah! If that’s what it does to you, imagine what it’ll do to the listener.’”

Africa Speaks is a beautifully sustained, blissful experience that opens with the fully immersive title cut, a righteous celebration that features Santana’s savage, yet shimmering guitar lines engaged in a joyful dance with congas, piano and a rousing choir of vocals.

On the fast-paced “Batonga,” Santana locks into a wicked free-form jam with David K. Mathews’ Hammond B3 that recalls the band’s early days. “This song means business – it’s got war paint,” says Santana. “It heals laziness, complacency, the doldrums that people feel. It revs up your enthusiasm to make you roll up your sleeves and invite other people to create heaven on earth together.”

“Oye Este Mi Canto” starts out seductive and sinuous, with Buika’s magical vocals playing off Benny Rietveld’s playful bass lines. As its deep funk groove deepens, Santana ignites a veritable bonfire of guitar voodoo. “This isn’t Hollywood or Palo Alto,” Santana notes. “This is African music. This is what Jerry Garcia or Michael Bloomfield would have heard and said, ‘I want some of that in my music!’ Well, you have it in you.”

All of the songs have a coliseum essence to them, Santana observes. “Whether it’s ‘We Will Rock You’ or Start Me Up,’ there’s certain songs that do that.” Which is a perfect way of describing “Yo Me Lo Merezco,” a crushing tour de force that sees Buika in sensational stadium-quaking form. Matching the singer’s fervor is Santana himself, dispatching three spine-tingling minutes of six-string splendor. The guitarist could also be talking about “Breaking Down the Door,” a sexy and frisky musical carnival that is bound to be a concert staple for years to come. With Santana’s slinky soloing doing pirouettes to Mathews’ transporting accordion textures, stirring horns converge with rhapsodic percussion and vocals to produce the ultimate feel-good sensation. The track also features Carlos’ son and Grammy Award-winning composer Salvador Santana on keyboards.

The guitarist’s otherworldly, wah-driven solos take flight on the stomping groove of “Los Invisibles” and the breezy, highly danceable “Luna Hechicera,” the latter of which features spitfire drumming by Cindy Blackman Santana along with the crisp percussion work of Karl Perazzo. This mesmerizing rhythmic excellence is on full display on the high-energy “Bembele” and the graceful grooves of “Mientras Tanto,” which sees Santana engaging in a spirited call and response with background vocalists Ray Greene and Andy Vargas.

Africa Speaks culminates with the cowbell-driven, epic marvel called “Candombe Cumbele.” As Cindy Blackman Santana works wonders around her drum kit and Buika leads an exultant vocal chorus, the man on guitar plays with time and space, exploring every inch of his instrument’s sonic spectrum. It’s a thrilling finale to a one-of-a-kind journey.

“This song captivates and freezes the moment of being in a total spell,” Santana says. “Certain artists like Jimi Hendrix and Stevie Ray Vaughan become a force of nature when they play. It’s like witnessing a tornado that’s coming at you. That’s what this music is about, capturing the metaphysical with the physical, and to do that you have to not be afraid to cast a spell.”

Distilling the 49 dazzling tracks that the band recorded in an unbroken, breathless 10-day period into an 11-cut album was no mean feat, but Santana, now 50 years into his remarkable career, succeeded in creating Africa Speaks as a compelling and uplifting vision that will rank as one of his most important and memorable works.

“This record was meant to be,” he says. “It was like a gift that came from heaven that we received and were meant to give to the masses. We validate people’s existence and touch on so many emotions – there’s humor, beauty, grace and the human existence. We look forward to touring this album over the next year.” 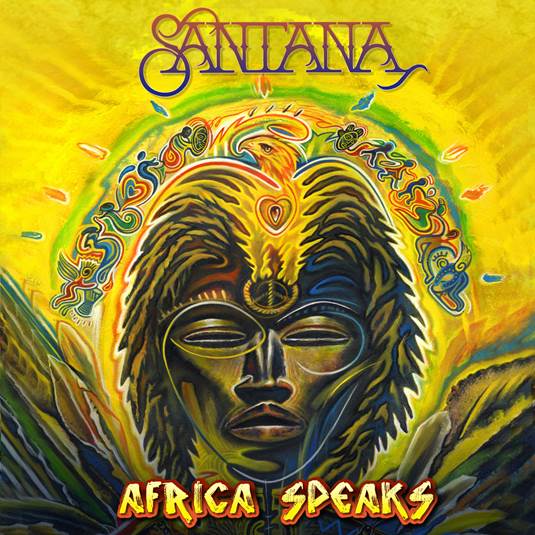