Experimental Sydney-based duo Plastic Face have today announced their dark, mysterious new single BACK2TOKYO, an exploration of how it feels to fall backwards into old habits, being an inner critic and finally getting yourself back onto the path to ecstasy, out today, April 1.  The enigmatic duo have also released a spooky and intriguing Lynchian video to accompany the track, written and directed by Sean Donovan.

Like their previous single HiiViSiON, BACK2TOKYO makes an immediate impact – but this time the atmosphere is provocative, moody; the kind of track you might hear at 4AM on the dancefloor of an exclusive European nightclub.  Entirely self-written, produced and mixed by the duo, the topline for BACK2TOKYO is undeniably hooky, and that’s the reliable thing about Plastic Face – they’re always pushing the boundaries of what pop/dance music can be, while also ensuring that their melodies are catchy and their songs are compelling you to press play again.  Speaking on the inspiration behind the track, Pete Stals says, “Our second single BACK2TOKYO, like all of our tracks, is 100% totally open to the listener’s interpretation.  For us, this song was inspired by making the same mistakes over and over.  We’ve used Tokyo as a metaphorical state of mind in which it can be interpreted as going back to old relationships you know are toxic, putting up with some horrendous job, or trying to manage addictions.”

BACK2TOKYO is accompanied by a dramatic and captivating video – dive deep into the murky underground where cool tones prevail as the camera meanders through an eerie house, and follows a shadowy figure performing what could be described as witchcraft…but as Plastic Face emphasise, it’s all up to the viewer’s interpretation.  Reflecting on the conception of the video, Will Coleman enthuses, “Our magnificent friend Sean Clancy Donovan wrote, directed and produced this unique music video.  This clip could be riddled with symbolic metaphors, or it could simply be a beautiful and seductive witch performing some ritualistic torture of unsuspecting masked individuals. The concept is yours to decide.  Either way it’s a visual feast for your hungry eyeballs and we absolutely love it.” Watch: BACK2TOKYO

Plastic Face are a breath of fresh air in a world where a lot of things are starting to look and feel the same.  With years of experience in the music industry under their belts, and hundreds of songs written between them, these are two individuals who have come together to make some truly innovative music and art while they’re both right at the top of their game.  They’re a pair of self-described “telepathic DMT elves with a penchant for world domination through the medium of pop music, existing in this current reality as human beings.”  Sounds like a pretty good time!

Plastic Face is Pete Stals and Will Coleman.

BACK2TOKYO is out today, April 1. Official single artwork below 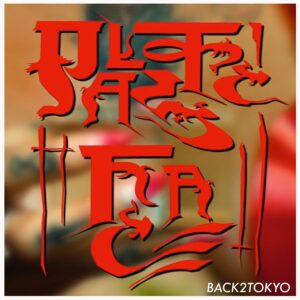