Melbourne quintet Phoenix Day have taken time to reinvent themselves and are today unleashing their brand new single “Follow Me Down”.

Premiering at TheMusic yesterday, “Follow Me Down” is a story of conflict; a love song turned sour. “It follows the bitterness of dissension and an argument that can never be resolved. The song sways back and forth from the quiet tension of an impending disagreement, to the viciousness of its peak,” explains the band.

“The symbolism of water used throughout the music video represents the suffocating nature of this endless cycle as it makes one feel as though they are drowning in a void of anger and misery. The more sinister element of the tale is the implication of a desire to continue this toxic pattern, suggesting a love of confrontation. Do you like me? Then fight me; let me pull you down the path of discord.”

Formed in 2015, Phoenix Day came to fruition from the personal collaboration of brothers Christian Meyer, Julian, and Markus. The band later expanded, bringing vocalist Dave Cousins and guitarist Luke Sciberras into the fold to create a versatile and dynamic sound – which is heard on the debut EP ‘We Are All The Same’ and followup single “Stronger”. 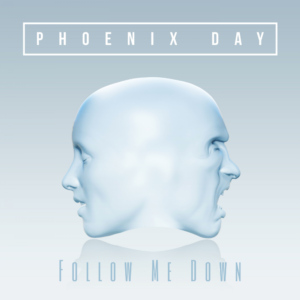 Following a hiatus in 2017 brought about by the departure of vocalist Dave, the band found new blood and life with Alex Dedecius who has brought angst and the heavy element that sparked the rebirth and a new chapter for Phoenix Day. This new chapter ensures a unique energy underpinned by huge choruses, layered guitars, and an understated rhythmic complexity. Pheonix Day in its current form is Alex Dedecius (vocals), Christian Meyer (guitar), Luke Sciberras (guitar), Julian Meyer (bass) and Markus Meyer (drums).