HEAD INTO THE THE

Offering a peak inside the recording process the film clip was solely shot and edited by the band at Marrickville’s Golden Retriever Studios.

Written as a meditative exorcism of the repetitive, ‘Smog’ speaks of the daily grind through synthy melodies with fuzzy guitars and understated vocals. Lead singer Tim Burnett says of the FBi premiered track “It’s about working 18 hour days, three floors below the streets of New York City’s Financial District. Working all day, writing yourself off, rinse and repeat. Dreaming of getting the fuck out to somewhere else.”

‘Smog’ follows on from previous woozy singles ‘At the Sign of Connie & Charlie’s’, ‘I’ll Sleep When I’m Good and Dead’ and ‘Harumi Hotel’ and their equally cinematic film clips which have been featured on Booooooom TV and chosen as Rage’s Wild One of the week. All these tracks will feature on the band’s forthcoming debut album out later in the year which melds influences from Ziggy Stardust-era David Bowie and River-era Bruce Springsteen, with the soft psychedelic approach of Japanese musician Harumi, and modern artists like Weyes Blood and Ariel Pink.

Revelling in the live realm, Fig have sold out all their previous shows including a single launch at The Lansdowne Hotel and a spot on Secret Garden Festival. With a stellar sold out track record they can add their upcoming performance at The Vanguard to the list. 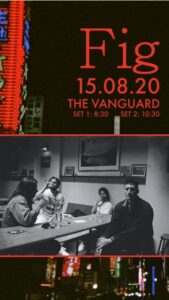