Continuing to brighten up 2020 with another stellar release schedule this year, PAX maintain momentum from their massive remake of Rui Da Silva’s Touch Me via Nothing Else Matters which scored no.1 on Beatport’s House Chart.

Also gracing other tastemaker labels this year including Sola, Adobe and REALM that have received BBC Radio 1 support from Danny Howard and Pete Tong, PAX have also added further Beatport top five spots and 8 million plus streams across all platforms to their name.

Now returning to REALM, PAX’s final release with Gorgon City will see them raise the bar even higher as they close the year out in style. An equally impressive year for Gorgon City, the lads have continued to add to their 1.2 billion global streams and 8 million singles sold with releases like Burning, Nobody and House Arrest alongside Sofi Tukker amassing over 17 million streams combined. Now returning to their own tastemaker imprint, Alive marks their first release back on REALM following on from euphoric club track Roped In last year.

PAX & Gorgon City – Alive is out now via REALM. 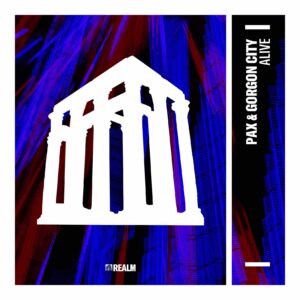 Having established themselves as one of the most in-demand acts in the industry, Gorgon City have enjoyed stellar success over the past 5-years thanks to their unique blend of bass-driven house music and addictive vocals. The UK duo, consisting of Kye Gibbon and Matt Robson-Scott, have developed a huge international presence, garnering over 700+ million combined streams to date, and playing to enormous crowds of dedicated fans around the world.

Following their debut single releases on Black Butter Records in 2012, things went into overdrive in 2014 with the release of their debut album ‘Sirens’ (70,000 UK copies sold) which also birthed their huge single ‘Ready For Your Love,’ ft. MNEK (64 million Spotify streams), peaking at #4 on the UK chart. The album marked a pivotal moment in the duo’s career and spawned 5 more UK hit singles through tracks like ‘Here For You’, ‘Unmissable’ and ‘Go All Night’ (feat Jennifer Hudson), which all achieved Top #20 positions in the UKSingles Chart.

The pair have continued to thrive in recent times with their recent Duke Dumont & NAATIONS collaboration ‘Real Life’, providing the soundtrack of summer 2017 from the UK to Ibiza and beyond. Equally adept at catering to the underground scene, Gorgon City have showcased their prowess for more rugged, minimalistic beats, through their own club- focused REALM imprint, which also housed releases such as ‘Pax – Snake’ , ‘Motorola’ and BBC Radio 1 specialist anthem ‘Primal Call.’

2019 has featured a handful of massive releases, including collaborations with MK, Gryffin, Aluna George & Kaskade, plus some crucial club material on their REALM imprint.

Undoubtedly one of dance music’s most popular, and fastest growing, acts in the world, Gorgon City continue their meteoric rise heading into 2020 and beyond.

Over the last year PAX have released on the likes of Sola, Abode and REALM as well which has rewarded them with numerous top 5 Beatport spots,  amassed an impressive 8 million+ streams across all platforms to date and gained support from Radio 1 heavyweights Danny Howard & Pete Tong.

Following on from their massive remake of Rui Da Silva’s ‘Touch Me, PAX will be closing the year out in style thanks to a huge collaboration with Gorgon City. There is no doubt that 2020 will be a year that many will want to forget but PAX have continued to deliver music for everyone in doubt.