Hailing from the Gold Coast, Queensland, Novus are an energetic 5 piece melodic-hardcore band who are taking over stages wherever & whenever they can! Today they are bringing the final chapter of a 4 single story arc to the world and closing out this chapter of the band before the next phase begins!

Their new single is called ‘Water Under The Bridge, and it will be released on Friday March 12 and will be available to purchase and stream on all digital stores and streaming platforms at http://ffm.to/novus_WUTB.

Jon Prestage, drummer and lyricist for the band says that “Water Under The Bridge is the final chapter of the 4 single releases we have released over the past 12 months. The song is about past events that are no longer important. It’s easy to get caught up in what is happening at the time and the different emotions connected to those moments, but at the end of the day, how many of them really matter? What’s happened has happened and you can choose to let it consume you, or move on and become a better version of yourself for it.“ 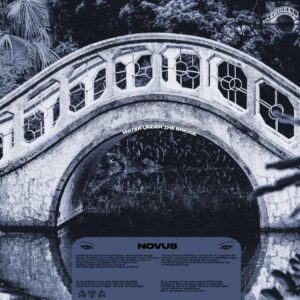 2019 and 2020 were actually particularly strong years for the band. They played SCHEMA FEST in Brisbane alongside Void of Vision and Windwaker in 2019 and with the release of their debut EP “Solace” in 2019, Novus spent the year building a fanbase in the local Brisbane scene, while traveling around South-East Queensland, and interstate to Sydney for the first time.

Last year saw Triple M’s “Hard n’ Heavy” declare them as ones of the “Top 10 bands to watch in 2021”, they enjoyed radio play on triple j’s The Racket and sold out their only hometown show in 2020! 2020 saw Novus continue their momentum with the release of 3 interwound singles “hopeless”, “Reflect” & debuting on the radio for the first time “Mythomania (feat Jack Bergin of Void of Vision)”.

This new single ‘Water Under The Bridge’ was written and produced by Novus, recorded, mixed & mastered by Zachariah James at Sinking Ship Studios and the Artwork was created by Raidensart.