TEAM UP FOR NEW SINGLE
‘FALLING ASLEEP AT THE WHEEL’

Following on from a mammoth set over the weekend at Splendour In The Grass, The Rubens are back in a huge way with the release of their new single, ‘Falling Asleep At The Wheel’ – a collaboration with provocative US punk-hip-hop star, Vic Mensa.

The band surprised fans on Sunday by premiering ‘Falling Asleep At The Wheel’ live at Splendour in the Grass on the Amphitheatre stage, featuring an epic performance by Vic Mensa via LED screen! Following the set, the track had its radio debut by Zane Lowe on Beats 1!

Vic Mensa – signed to Roc Nation – has released hits such as ‘Down On My Luck’ & ‘U Mad’, and is part of the hip hop collective Savemoney, which includes frequent collaborator Chance the Rapper. The artist is also the founder of the Save Money Save Life Foundation, an initiative designed to combat American racism and injustice through various arts and education programs.

Frontman Sam Margin explains how the track came together:
“We wrote this track in LA earlier in the year and immediately fell in love with it. We wanted to make something out of the box musically and really push the song into new territory for us as a band. I’ve been a fan of Vic Mensa for a while now and think he is one of the most interesting and creative forces in hip hop right now. As luck would have it his guitarist somehow got his hands on the tune and spun it for Vic. Few days later I’m back in LA with Vic putting down his vox at his Silver Lake studio. He nailed it, and next day I was looking over the Pacific Ocean again.”
“The Rubens are fantastic — was honoured to jump on this track. Look out for the boys coming to the US with a big wave” – Vic Mensa

The Rubens SITG set was full of surprises. After dropping the brand new track, their set also featured a special guest appearance by G Flip, joining the band to sing Sarah Aaron’s part of their double platinum single ‘Never Ever’ & joining Scotty on drums for their stomper, ‘Hallelujah’.

The band have barely slowed down since 2018, which proved to be an incredible year for The Rubens – alongside releasing their third album LO LA RU, the band embarked on a mammoth headline tour across Australia, New Zealand, the United States and Europe and supported P!NK on her massive 42-date sell out arena tour of Australia and New Zealand.

2019 has seen The Rubens travel to North America for a headline tour, perform and release their MTV Unplugged Live In Melbourne album + bunker down to write and focus on new music.

All the while, in the background, the band have also been working on a passion project called Chucka Buckas – a brand that The Rubens have established to support new and emerging bands. The initiative came about after the band spoke at the NSW Parliamentary Enquiry regarding the state of live music in NSW, conveying passionately the importance of small venues and the ecosystem they exist in, and how critical this is in developing careers in music. As a reactionary measure, they decided they needed to do their bit to help grassroots music, which is when the idea for Chucka Buckas was born. Since November last year, the band have been running monthly Chucka Buckas nights at The Botany View Hotel; however this weekend marks the brand’s first regional tour, which will see The Rubens welcome two of their most loved emerging bands, Milan Ring and Shady Nasty to do 9 dates with them across New South Wales in July & August, as well as a local opening act in each region.

The release of ‘Falling Asleep At The Wheel’ marks the start of an exciting new chapter for The Rubens. Watch this space!

LISTEN: ‘Falling Asleep At The Wheel’ by The Rubens & Vic Mensa 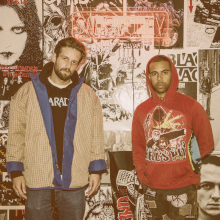 ‘Falling Asleep At The Wheel’
The Rubens & Vic Mensa