Melbourne via Wellington’s favourite punks, Bakers Eddy return with new single ‘Can’t Afford It’, a cheeky punk rock anthem! To coincide with the single release, Ivy League Records is incredibly excited to welcome the band to the label family. A song that has already been uniting audiences in cathartic mass sing-along at their recent live shows, ‘Can’t Afford It’ is undeniably catchy and can barely contain the band’s ruckus, youthful energy.

‘Can’t Afford It’ is a song about living pay check to pay check and trying to make ends meet. I wrote it in my bedroom after coming home from the supermarket, on a budget of $3.50, still managed to make a dope lentil Bolognese, ” explains front man Ciarann Babbington.

Formed in Wellington, New Zealand when they were just 13 years old, Bakers Eddy began when three high school friends decided they wanted to do something other than skating with their time. Originally comprising of lead singer Ciarann Babbington, Drummer Jamie Gordon and Bass player Ian Spagnolo, the band quickly recruited Ian’s twin Brother Alex Spagnolo on guitar. “We got sick of Alex playing PS3 in the same room while we rehearsed, so we taught him an A chord and he was in,” explains Ciarann.

Whilst still in Wellington, the band supported the likes of Gang of Youths, The Rubens and US punk band Highly Suspect. They also graduated high school and continued to hone their craft, while successfully managing to avoid going to uni or getting real jobs.

In 2017 Bakers Eddy decided to take a giant leap of faith and move to Melbourne. Once settled, they took it upon themselves to write 50 songs in 50 days. The songs themes ranged from being broke, drinking too much, failing at love and technological dependencies, essentially, as Ciarann deduces, “being 21 in a new city”.

They enlisted the help of fellow Kiwi, producer Tom Larkin (Shihad) and independently released their debut EP I’m Not Making Good Decisions in April 2018. The band rode out that year playing shows up and down Australia’s East Coast as well as a short European tour, stopping in Germany and the UK for The Great Escape Festival.

In late 2018 the band released the single, ‘Leave It To Me’ which was added to high rotation on triple j and community radio stations and saw them championed by triple j Unearthed, taking out the platform’s coveted Falls Festival 2019 comp in Victoria.

Bakers Eddy kicked off 2019 by signing to Ivy League Records/Music and writing and recording a bunch of new material. Australia’s newest adopted sons are always ready to party with their infectious, fast-paced tunes in tow! They are here to stay and aren’t we a better place for it! 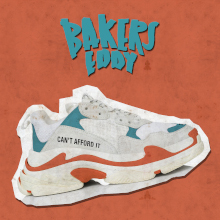