In exciting news, Mojo Juju is the recipient of the Development Award 2019 for her outstanding musical talent and the potential to develop her professional career. The Development Award was announced at the esteemed Melbourne Prize for Music 2019 Awards.

When Mojo Ruiz de Luzuriaga, known professionally Mojo Juju, dropped her album Native Tongue in 2018, it was an unforgettable statement. Where her previous output had steered away from being overtly intimate and raw, Native Tongue burst out like a diary on record, a deep exploration of Mojo Juju’s Indigenous and Filipino identity and how this has shaped her. Mojo Juju has bagged some of her greatest achievements to date off the back of Native Tongue including collecting over 20 award nominations, including three at the ARIAs.

Don’t miss her Native Tongue Tour which kicks off in Brisbane next week before heading to Sydney & Melbourne. Ticket info here

NATIVE TONGUE is OUT NOW via ABC Music / Universal 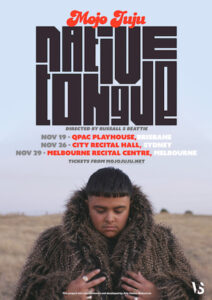