Melbourne rock group LOSER have announced details of their sophomore full-length All The Rage, alongside a heaving album release tour. More details and tickets to the tour, kicking off in September, are available via bandcalledloser.com

Self-recorded out of the band’s newly launched Restless Noise Studios (named for their 2018 EP) and mixed by Anton Hagop (Silverchair, Powderfinger), All The Rage draws on LOSER’s penchant for nostalgia and rock combined. You’ll hear a slither of Weezer-esque melody on ‘All I Need’; a summery Oasis vibe on the slow-burning ‘Time Won’t Wait’; and guitar solos channelling the likes of Queens Of The Stone Age on ‘Skyward’.

The 10-track album, out Friday September 10 via Domestic La La, opens with new single and music video ‘Head First’, out officially today after the track premiered via triple j’s Good Nights. LOSER vocalist/guitarist Tim Maxwell tells the story of how this track came to life:

“The very first line of the song came to me after an incident where I was shopping and I went to try on an item of clothing with my head down walking into the change room but little did I realise there was a huge steel beam above me. It sent me straight to the ground and no one in the shop noticed for a bit haha

“It didn’t feel very nice and felt like part of my brain was missing. The song is about determination to keep doing what I want in my life and never give in. Musically, the idea was to have that acoustic blink feel with a huge pumpkins style verse/chorus.”

CLICK BELOW TO WATCH THE MUSIC VIDEO FOR ‘HEAD FIRST’

About ‘All The Rage’
All The Rage offers a powerfully honest and emotive distillation of who LOSER are at their collective core. Especially so for singer-shredder Tim Maxwell; while in the past he would hide behind metaphor to expound on his inner turmoils, this album (which follows their 2020 Australian Music Prize-nominated effort Mindless Joy), marks a daring leap forward into a new world of soul-baring songwriting.

It all came to a head when Tim was laying down the vocal track for the album’s lead single, ‘On The Edge’ and suffered a breakdown in the studio. The resulting record is one that doubles as a lifeline for Tim, and those struggling to find their own mental stability mid-pandemic. All The Rage encourages its listener to stay strong and keep pushing forward; to know that no matter what, they’re not alone, and it’s without a doubt they’ve got what it takes to stand victorious in the fight against their demons.

“I hope there’s something on this album that people feel like they can relate to,” comments bassist Craig Selak. “Even a song like ‘Skyward’ – I mean, it’s about aliens, but it’s also about feeling like when shit’s hitting the fan, you can step out and just focus on yourself….I think that’s the overarching theme of the album: you don’t have to step away and hide from the world, you can look within and find something that makes you feel more comfortable. And that really sums up the personal growth we all went through in trying to record this album, learning not to overthink things, and Tim’s personal journey with his mental health over the pandemic.

“I hope people feel at home in these songs, and that it’s reaffirming on some level…And I like the guitar solos.”

LOSER’s broader pandemic experience involved the launch of their own Restless Noise Studios, after band-and-real-life-brothers Tim and Will took to their parents’ garage to build the space from scratch during lockdown. LOSER self-recorded All The Rage at Restless Noise over the last year, burying their heads into some of their favourite classic artists’ catalogues to draw out every bit of nostalgic influence possible.

“I basically wanted to give the kids of 2021 an opportunity to feel what I felt back in the day,” Tim rhapsodises, “When I would hear bands like Green Day for the first time and just lose my mind.” To really lock himself into the mindset of his alt-rock idols circa 2002, Tim binged on YouTube playlists of classic Video Hits highlights, studying the enigmatic idiosyncrasies of bands like blink-182 and Powderfinger to ascertain exactly what made their three-minute fire starters so deliciously addictive.

Capturing all this with a distinctive twist from LOSER, All The Rage is set to be remembered as essential Melbourne-rock listening in years to come. 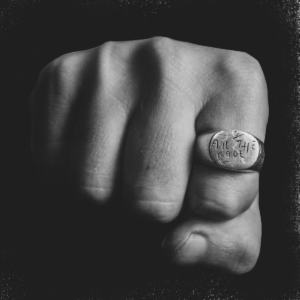 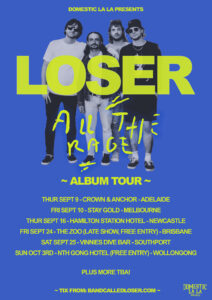