Point Guard bustles with plush reverb, driving beats and creamy vocals courtesy of David himself, calling to mind the effortless ease of Gang of Youths while also deftly showcasing David’s soft gravelled croon. Entirely self-produced with mastering courtesy of Huntley Miller, who has also mastered albums for some of David’s heroes Hippo Campus and Bon Iver, Point Guard is a glistening blend of congenial modernity and measured laidback ease as David continues to sharpen his blossoming adoration and innate knack for indie music. Infusing glowing sincerity stemming directly from David’s own experiences, Point Guard takes the lead as a fun, friendly and frothy offering that is equal parts relatable and irresistible. Of the track’s personal exploration into relationships and vulnerability, “Point Guard is about the gratitude and hopes you have for your loved one. To me it’s about my girlfriend, but at the end of the day it’s about anyone you love and find comfort in being vulnerable with – whether it be a friend, partner, family, or stranger on the street. For me it’s tough to do that, so I’m glad I have someone I can do that with!”

The video for Point Guard perfectly complements this genial intent, with the single’s music video bringing nostalgic home movie visuals to the table. Made entirely by David and his girlfriend, and complete with karaoke-ready bouncing ball lyrics, the clip follows an adorable narrative complete with dogs, waterfalls, sun-drenched trees and David and his girlfriend living their best peaceful lives. With real-life love on full display, it’s impossible not to fall head over heels even more for Local the Neighbour’s new single and clip, which was inspired not only by relationships but also a passion for antiques, as David explains, “The song is about my girlfriend, and for my birthday and Christmas (they’re very close together) last year, she and some friends and family bought me a vintage Super 8 camera. I love old things and the history they have, so it felt really fitting to run a bunch of film through it and create a  music video with that camera, documenting parts of our lives at the time.”

Originally growing up in Darwin before moving to Melbourne to study music, David’s significant background in jazz has seen him study at both the Victorian College of the Arts (VCA) and at UCLA in Los Angeles alongside the likes of Clayton Cameron (Frank Sinatra, Sammy Davis Jr) and George Bohanon (Earth, Wind & Fire), while also performing with ARIA award-winning jazz musicians and appearing as a feature artist in the 2021 Melbourne International Jazz Festival. Fusing his infatuation with the boundless creativity of jazz with his ultimate musical passion, indie rock, David brings a sharp execution to his expertly-crafted new material under the Local the Neighbour moniker; an effortless lesson in technicality with an everyman charm that offers a musical companion to those needing hope in life’s less-than-rosy moments.

Point Guard is out today. Official single artwork below 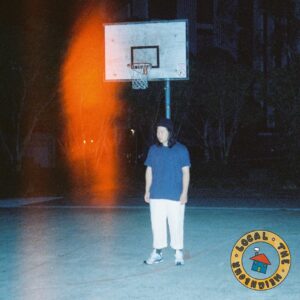