Port Mac’s heaviest exports are back and ready to go off like a bomb. Letterbomb A.D.’s new single ‘Smoke & Mirrors’ drops on Friday July 23 and will be available at http://ffm.to/letterbombad_smokeandmirrors.

Lochlan Watt premiered the track Tuesday night on triple j’s The Racket – and Slipknot’s festival site/media outlet Knotfest premiered the video, saying that the band “…straddles the ethos of hardcore with the pummeling precision of deathcore in a way that resonates as fresh as it does extreme. The band manages to evoke the kind of brutality that supersedes the cheese of the descriptor actually make good on it’s claim.”

The absolutely chaotic, abrasive and intense track comes with a videoclip directed by James Mantle. The single was Recorded And Mixed By Mittah Norath at Tommirock Studios and Mastered by Joshua Bartel at Viking Lounge Mastering.

Vocalist Garrett McMaster says that “This song is about isolation-turned cabin-fever, and the toxicity of unhealthy relationships and removing ones self from situations in life that initially might be a painful uphill-climb but ultimately are essential for the progress of happiness and self-growth.”

He went on to add “I feel this is something that a lot of listeners will be able to relate to if they have been through any similar hardships, and the general feeling of isolation from COVID-19 over the past year which we have all experienced the effects of on a worldwide basis.”

Letterbomb A.D. – Dominic Sutton on Guitars, Keegan McCleary on Bass and Garrett McMaster on Drums & Vocals – have crafted a unique blend of chaotic hardcore and extreme metal. A sound that takes influence from the technical proficiency of mathcore, the brutality & speed of deathcore, and the raw aggression of hardcore.

In their short 3 years as a band, they have dropped their self-titled EP and 2020 single Dystopia, the majority of which were featured on official Spotify playlists Deathcore & Homegrown and Heavy – and have shared the stage with Northlane, Thy Art Is Murder, Make Them Suffer, Justice for the Damned, Alpha Wolf, Diamond Construct and more.

Letterbomb A.D.’s new single “Smoke & Mirrors” will see its release into the world Friday, July 23 on all digital stores and streaming platforms – and will be available at http://ffm.to/letterbombad_smokeandmirrors. Official single artwork below 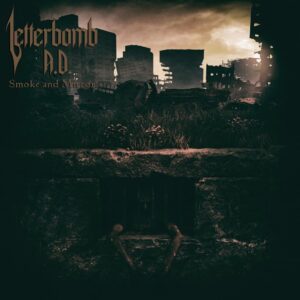