An established face in the Australian hip hop and alt-pop scene, Kirklandd is set to make waves in 2020; his new single “SIIYE” is complete with earworm melody and skittering trap-punk sonics, and is the first in a three-single trilogy titled ‘The Love Divide’. Drawing on influence from Blink 182 and Trippie Redd, “SIIYE” captures a sense of inner conflict and regret that many will relate to.

A trilogy of songs cataloguing three moments within past relationships, ‘The Love Divide’ sees Kirklandd shift away from his established flow and delivery, moulding a new vocal direction to authentically capture the feeling in the heart of these moments. 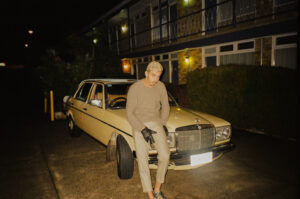 “‘SIIYE’ takes place in the moment where I finally found the strength to ask what I’d been too afraid to,” said Kirklandd. “When I did, that relationship ended shortly after. My intuition told me that something was wrong, I addressed it too late, and I was left wondering if I ever should of brought it up in the first place”

Kirklandd is well established in the Australian music scene, having appeared on the festival stages of Spilt Milk, Groovin the Moo, and NYE on the Hill, and collaborated with the likes of Genesis Owusu and Zellow. He has also caught the attention of industry heavyweights, landing a spot as triple j Unearthed Feature Artist, winning the Groovin’ the Moo triple j Unearthed competition in 2019, and being nominated in the National Live Music Awards as Best Live Act for Canberra.

As the story of the trilogy continues to unfold, Kirklandd will be performing “SIIYE” and more singles in The Love Divide Sessions, a virtual performance with an 8-piece live band being streamed on August 28th. Kirklandd will be partnering with Support Act for these performances, raising money for their COVID-19 emergency relief fund, set up to help those in the music industry affected by the pandemic.

“Conjures up a delicately curated homage to a preserved era of hip hop and soul.”
– PileRats

“…traverses across so many influences and sounds and brings a hi-octane fun attitude throughout it all.”– Declan Byrne (triple j Unearthed)

STAY CONNETED WITH BLACK OF HEARTS