A NEW LINE UP AND A BRAND

Perth’s post-black metal quintet Illyria are back with a new line up and a brand new single “Frostbite”. The new single marks a new direction for the band since last year’s sophomore album release ‘The Carpathian Summit’, and to celebrate, Illyria will launch the single live at Perth’s Amplifier Bar!

Illyria became known for their progressive post black metal sound that held no boundaries on their 2019 album ‘The Carpathian Summit’. “Frostbite” shows the development of the band and introduces a more technical yet catchy prog-rock, metal blend featuring the signature clean, blackened vocals mixed with progressive instrumentals. “Frostbite” is a versatile composition that flows through the veins of prog-rock and death metal with new members Stephen Barrett and André Avila on guitars pushing the band to new technical horizons.

Engineered, mixed and mastered by Illyria bassist and producer Daniel Hacking, “Frostbite” is a mesmerising composition with smooth dynamic shifts and is a song about moving forward from a messy break-up as best as possible. Vocalist Ilija Stajić explains “the track explores the idea of eliminating all emotion and connecting to stoic philosophy to find bliss through independence“.

The music video premiered at Maniacs on Wednesday, demonstrating the bands DIY ethic in the form of a self-made, striking visual asset to compliment the cool undertones of “Frostbite”. Watch the video below!

‘The Carpathian Summit’, recorded, mixed and mastered by Daniel Hacking made waves with the release of “Kenopsia” and “Wilderness” – showcasing Illyria’s chaotic cacophony of crafted sounds. “Kenopsia” tapped into a post-black metal niche that appealed to a wide audience and in just a couple of days, “Kenopsia” received six 4+ star reviews from the triple j team on the band’s Unearthed page, earned a spot on triple j Unearthed rotation and was played on triple j’s Home & Hosed and triple j’s The Racket.

“Wilderness” followed suit and experimented with a post-punk vibe that was a refreshing hit within the black metal community. Shortly after release, “Wilderness” made its way on to two Spotify editorial playlists, ‘Black & Dark Metal’ and ‘New Metal Tracks’. ‘The Carpathian Summit’ made its way to #6 on the Australian Independent Record Labels Association‘s album charts and was picked as one of Killyourstereo‘s Best Releases Of 2019 (So Far), as well as receiving rave reviews worldwide for this huge sophomore release.

Illyria is Ilija Stajić on vocals and guitar, André Avila and Stephen Barrett on guitar, Daniel Hacking on bass and Matt Unkovich on drums. The band has shared the stage with a number of musical acts including Alcest, Wolves In The Throne Room, Cattle Decapitation, Revocation, Plini, Caligula’s Horse, Make Them Suffer, Polaris and Ne Obliviscaris with the vision of expanding their horizons.

Illyria’s new single “Frostbite” is out now and available to stream on iTunes & Apple Music/Spotify/Google Play and all good online stores and streaming outlets.

Watch video for ‘Frosbite’ below 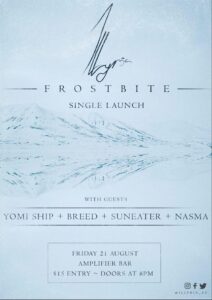