Joji teams up with Diplo on a new collaboration called ‘Daylight’, the latest single from his highly anticipated new album Nectar, due out on September 25 through 88rising, distributed by 12Tone Music. Just in time for the dog days of summer, this midtempo anthem sets Joji’s lulling vocals against Diplo’s crisp production to create a hazy, shapeshifting aural mirage. Listen and watch HERE.

The vibrant music video for ‘Daylight’, directed by Munachi Osegbu (Megan Thee Stallion’s ‘Hot Girl Summer’ video), finds Joji and Diplo tasting the high life of a boy band… as struggling PAs on a 90s music video shoot. The two daydreamers bumble around the set and ultimately derail the shoot of the young (at heart) pop divas.

Daylight’ is the fourth pre-release track from Nectar. It follows Gold-certified single ‘Sanctuary‘ and his first 2020 single ‘Run‘, which earned Joji his highest-ever entry on the Billboard Hot 100 and his television debut on the Tonight Show with Jimmy Fallon; and second single ‘Gimme Love‘ which Complex hailed as “a sticky pop anthem with haunting vocals.” Last month, Joji also released a tingly and transformative remix of ‘Gimme Love‘ by Channel Tres.

On the song, Joji says “It might be nice for people to hear a song about daylight, especially when we don’t get as much of it as we used to”, and on the collaboration, Diplo says “Joji is one of my favorite artists. I’m lucky he answered my text!”

‘Daylight’ is out now via 88rising Records/12Tone Music,
buy/stream it here. 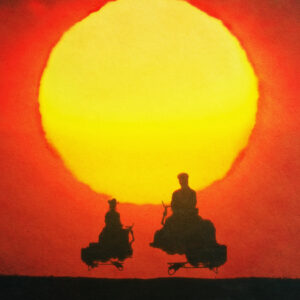 ABOUT JOJI
Joji is one of the most enthralling artists of the digital age. He has a total vision for his work, not just in the writing and producing of his music, but artwork, videos, merch, and live performances as well. It’s a fully realised world that his fans can inhabit and explore – and see themselves in. “My music is not biographical”, he says, but even still, the deep, heavily shaded emotions in his songs are genuine and they speak to anyone who has ever felt stuck on the outside looking in, who knows what it means to not belong. In 2019, Joji sold-out his North America tour within minutes and performed at some of the most coveted festivals across the world, including Reading & Leeds in the UK and Lollapalooza. As Joji surpasses 4.2 billion global streams, 2020 promises to be his biggest year to date.

ABOUT DIPLO
Born Thomas Wesley Pentz, Diplo is one of the most dynamic forces in music today under his own name—he just released a long-awaited country album: Diplo Presents Thomas Wesley Chapter 1: Snake Oil including the double-Platinum ‘Heartless’ with Morgan Wallen – and as a member of the now legendary Major Lazer – whose latest ‘Lay Your Head On Me’ featuring Marcus Mumford is climbing charts worldwide; LSD, the psychedelic supergroup with Sia and Labrinthwhose debut album has been streamed over one billion times; and Silk City with Mark Ronson, whose Platinum-certified ‘Electricity’ with Dua Lipa topped charts worldwide and won a Grammy Award for Best Dance Recording. As the world’s most in-demand producer, Diplo has worked with artists as disparate as Beyoncé, Bad Bunny and Turnstile.