Omar Apollo, one of the most talked-about new artists of the last couple of years, returns today with the release of his new song ‘Stayback’; and the accompanying music video. The first single from his forthcoming project, the track is a self-produced and self-written song recalling the woozy, soulful side of the Parliament-Funkadelic collective. Only having released one other song all year, Omar emerges from a deeply creative period ready to deliver on the promise displayed across his early releases. Listen HERE,

Speaking on the inspiration behind the song, Apollo says: “Stayback is a song about being in love for a long period of time. After years of being hurt emotionally, I moved on and decided to treat the relationship as a memory instead of fantasising it and trying to make it work. When I finished the production, I realised this was the song that I’ve been wanting to make my entire career. My guitar player Oscar killed the solo on it and really brought the whole thing together.”

Since his 2018 critically-acclaimed debut EP Stereo, Omar Apollo has continued to ascend as an undeniable talent to watch, becoming one of today’s brightest breakout stars. Last year he released his second EP Friends, and Rolling Stone named him an Artist You Need To Know, Pitchfork featured him as a Rising artist, he made his late-night television debut on Late Night with Seth Meyers, and he had two headlining North American tours which included stops at Tyler, The Creator’s Camp Flog Gnaw Carnival and Tropicalía Festival. He was also part of YouTube’s Foundry International artist development program, with past alumni including Cuco, ROSALÍA, Gunna, Chloe X Halle, and Dua Lipa. In late 2019, he released a pair of singles with Kenny Beats – ‘Frio‘ and ‘Hit Me Up‘ – the former showcasing Spanish lyrics and playing off of Dembow music, the latter of which featured Dominic Fike. More recently, he released ‘Imagine U‘ which was also co-produced by Kenny Beats and was described by Uproxx as “an alluring, melodic anthem about modern heartbreak.” 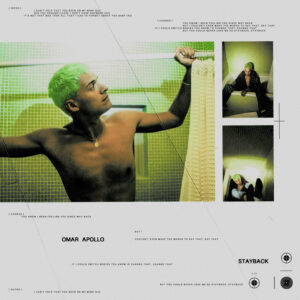 ‘Stayback’ by Omar Apollo is out now, buy/stream it here.

ABOUT OMAR APOLLO
In just a few year’s time, Omar Apollo has gone from teenage strummer to one of the most hotly-tipped R&B artists of his generation. Raised on a steady diet of legends ranging from Brandy and Musiq Soulchild to Prince and Stevie Wonder, the Indiana-raised Mexican-American singer-songwriter picked up a guitar at the age of 11 and never looked back. Learning to play and create in the age of SoundCloud and YouTube, he absorbed his influences both contemporary and classic alike while navigating a variety of genres and styles.

By the time Apollo turned 18, he’d begun uploading his songs to streaming platforms, having fun creating but still not entirely sure about pursuing a career in music. That all changed with ‘Ugotme’, a breakout single fueled by a chance playlist inclusion that grew his fanbase rapidly, the quintessential modern-day music business come-up. That success prompted him to keep honing his craft, resulting in a pair of EPs Stereo (2018) and Friends (2019) that demonstrated his 90s-inspired, subtly bluesy, and occasionally bilingual approach to bedroom soul.

Since then, the now 22-year-old Apollo has transitioned from the freeform D.I.Y. creativity of those beloved earlier records towards a more focused development of his sound. He’s making deeper connections between his music and his Latin roots while laboring over each song in ways he never would’ve before. Part redefinition, part enhancement, the autobiographical new material he’s been working on for his upcoming projects promise to bring him to another level in his career.