Fresh off the back of the release of their debut project HEATHEN, New York’s HOKO have released a new set of visuals for their latest single, ‘Big Mistake’.

As part of the wider HEATHEN EP, ‘Big Mistake’ is a standout point for HOKO – the song is a fleshed out and fully realised example of the type of band they are. Striking and captivating at their core.

A  track that focuses on the dissolution of relationships, viewed through a sharp and entertaining indie pop lens, ‘Big Mistake’ is anything but for HOKO. It’s a touchstone release for the group, who have been taking strides since their inception only a few years ago.

“I feel like most songs come to you and write themselves through you, but I’m pretty sure ‘Big Mistake’ is a song about some of my exes. It’s a pop song with sitars and yoyos weaved through it; it’s a perfect example of the line we wanted to walk for HOKO. Exploring pop but keeping it unique and a little cynical. For the record, I have no hard feelings towards any of my exes who may read this; everyone is someone’s Big Mistake, I know I am!” Nathaniel Hoho, HOKO

Recently, HOKO took part in Rolling Stone Australia’s ‘In My Room’ series, where they performed ‘Big Mistake’ as well as ‘Starlite’ and ‘Hellogoodbye’ in a special stripped back style.

Says Rolling Stone of ‘Big Mistake in particular, it is ‘a track that perfectly helps to encapsulate the HOKO sound, in this case features Hoho’s Weeknd-esque voice, and luscious, subtle backing instrumentation that mix ambient soundscapes with electronic melodies.’

“HEATHEN is an album that sees HOKO fully flex on their ability to produce music that is likeable for almost everyone. Pushing the boundaries on all types of sounds, they really have a knack for producing tunes that sucks the listener in and takes them on a ride.”
AAA Backstage
“The EP is a stunning showcase of a band who are likely set to be household names in no time.”
Rolling Stone Australia 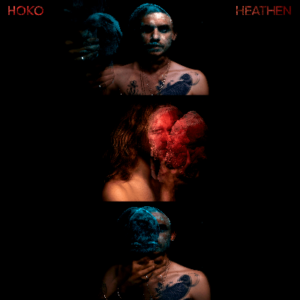 HEATHEN is out now.