Today Fontaines D.C. release their highly anticipated second album, A Hero’s Death – out everywhere now via Partisan Records / Liberator Music. Arriving battered and bruised – albeit beautiful – the album is anything but a re-hash of the swaggering energy from their first record Dogrel. Instead, the music is patient, confident, and complex – a heady and philosophical take on the modern world and its great uncertainty.

A Hero’s Death includes the recently-shared album highlights: the live favourite, ‘Televised Mind’, the lonely intensity of ‘I Don’t Belong’ and the hypnotic title track, which features a music video starring Aidan Gillen (Game of Thrones, The Wire, Peaky Blinders).

The band’s debut album Dogrel debuted Top 10 on the UK album charts, earning Fontaines D.C. a Mercury Prize nomination, #1 Album of the Year positions from BBC 6 Music and Rough Trade, a performance on The Tonight Show with Jimmy Fallon and numerous sold out tours in the UK and abroad – including triumphantly selling out London Brixton Academy in just 1 week. The Guardian (who gave the album 5 stars) praised Dogrel as being “brilliant, top to bottom,” The FADER called Fontaines D.C. “One of the most exciting new bands around,” and NME (who also gave Dogrel 5 stars) called them “One of guitar music’s most essential new voices.”

A Hero’s Death is out everywhere now and is this week’s Double J Feature Album. 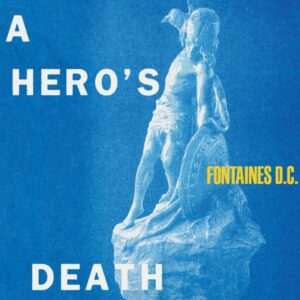