“Smart Girls” is a girl power anthem from enigmatic talent Aya Yves. A unique take on the dark-pop genre, the track is our second helping of this exciting new artist, after she revealed her debut single, “(in)Sanity” earlier in the year. A collaboration Australian producer Xavier Dunn, whose impressive catalogue also crosses genres and styles (Jack River, CXLOE, Graace, Carmada, Peking Duk), “(in)Sanity” was promptly added to rotation on triple j Unearthed and praised by PileRats, Project U TV, Women In Pop, Don’t Bore Us and more.

“(in)Sanity” amassed 30,000 streams in just two months – receiving nationwide radio play on triple j’s Home and Hosed and leading on to performances for Isolaid, The Tait Show and Live In Ya Lounge – proving that there is an audience already eager for more of this exciting new artist.

To me, music has and always will be about creating conversation, connections and ultimately helping people through whatever motion they’re feeling at the time-be it positive or negative-it’s a way to share in that moment.” said Aya.

Keeping the momentum going, Aya decided to collaborate with Sydney Indie Pop outfit ‘Boulevarde’,asking them to remix (in)Sanity and give it their own unique spin.

“We both had a really difficult time in isolation for different reasons, which would normally mean for us aoutPour of music. But unfortunately, we felt very creatively paralysed-avoiding opening sessions. When Aya asked us to remix (in)sanity though, that was an opportunity we couldn’t pass up because we loved the original so much! We really related to the message of the song and remixing it helped break us  out of our creative block. There were so many cool elements in the song we got to play with-not to mention the incredible vocal.”-Boulevarde

With an EP to follow later this year-Aya is an artist you’re going to want to be keeping tabs on. 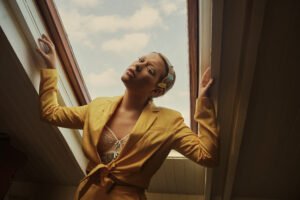