FROM THE NEW ALBUM

‘LIFE IS YOURS’ WHICH

As the 17th June release of Life Is Yours approaches, British rockers Foals today unveil their new single “2001”.

“2001” elevates the disco and funk influences that permeate Foals’ recent tracks “Wake Me Up”, “2am” and “Looking High”. Yannis Philippakis’s falsetto soars as high as the sky he references in the song’s opening lyrics, accompanied by a riff that bounces with groove and precision, and a popping P-funk bassline. While “2001” finds Foals stepping boldly into the most electrifying example of their new sound, lyrically it’s pure reflection.

Yannis says, “‘2001’ feels like a postcard from the past. We moved to Brighton around that time, we were a young band, and there was the feeling of the first taste of independence. The moment you get those freedoms, you’re surrounded by temptation. The references to beachside candy and Brighton rock are symbols for drugs and hedonism. This was written in the depths of the pandemic winter, and there’s an escapist desire to break out from the feeling of being cooped up, both in terms of the pandemic and adolescence.”

The “2001” video transports those themes to Costa Brava, Spain to place the song’s nostalgic ambience firmly in the here-and-now. Two young men lug their sofa from their apartment to soak up some rays on the beach. Other vignettes of coming-of-age experiences follow their every move, from the effortlessly cool group of young women who observe their struggle with nonchalant indifference to a couple kissing. When one of the men chews a sweet that everyone seems to be consumed by, his summer day takes on a new hallucinogenic edge.

The video’s modernist nostalgia is heightened by its aesthetic – a washed out palette and Polaroid-style framing. It was directed by ESTEBAN(Arca, Peggy Gou) for the creative production company CANADA.

“2001”  was written by Foals – Yannis, Jack Bevan and Jimmy Smith. The track’s production is one of a number of songs on Life Is Yours that benefit from an experimental approaching of mixing up different configurations of creative voices. On “2001”, production was led by A.K. Paul(co-founder of the Paul Institute with his brother Jai Paul) and John Hill (Cage The Elephant, Florence + The Machine), with co-production from Miles James. It was then mixed by the ten-time Grammy Award winner Manny Marroquin (Post Malone, Kanye West, Rihanna).

Life Is Yours is available to pre-order HERE and is already in phenomenal demand – its beautifully realised zoetrope format sold-out its entire 5000 copy pressing in a matter of days. Another essential release for vinyl connoisseurs and Foals collectors comes with  the long-awaited vinyl repress of their debut album Antidotes, which will be manufactured using recycled vinyl records – a process that ensures that each individual record is unique. 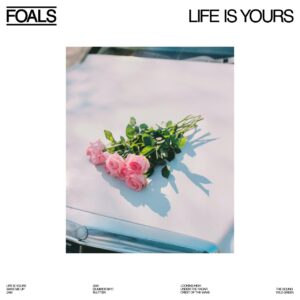 “A dopamine-soaked reimagining of the debauched freedom that we’ve been lacking for too long, ‘Life Is Yours’ makes for one hell of a tonic.” – NME

“The seventh and best [album] of their career  is a euphoric party record.” – The Guardian

“‘Wake Me Up’ is the most immediate & bright pop song Foals have put to tape in years.” – Rolling Stone

“One of the most powerful acts spearheading UK indie rock.” – Evening Standard

“‘Looking High’ is sonically playful; Foals have managed to capture a dancefloor-worthy sound that is bright and airy, a light and glitsy flare of energy. It oozes serotonin, as twangy riffs guide you through and enchant your senses.” – Clash

“Foals are back and ready to experiment with different sounds and the result is a feel-good morsel of pure musical escapism.” – Gigwise