DOUBLE-A SIDE ‘ANOTHER KNOT’

First track, ‘Another Knot’ is a hip-hop, acid house and UK garage hybrid that features the silky vocals of London poet and singer RUE, who was the featured artist on BBC Music Introducing in London this past February and whose music has been featured on Reprezent Radio, Complex and TRENCH. After stumbling across RUE’s music on SoundCloud, Dro was instantly blown away and reached out to propose a collaboration, resulting in the delectable club track, with a poetic spoken word overtone that makes it instantly Dro Carey.

Acting as a Yin to the Yang on the two-track offering is ‘Predictions’, a track that was originally a short demo production for an R&B artist. Originally much faster and brighter, the final product is a more subdued journey that still retains a R&B heartstring at its core, while reminiscing on a Burial-esque type beat making it the perfect companion to ‘Another Knot’.

This double release follows in the footsteps of 2019’s ‘Act Like You’re Home (feat. Beni Moun & Julietta)’ / ‘Hemisphere’ which premiered via CLASH, and saw global streaming support from Spotify (including claiming the coveted cover of Top Shelf Electronic), Apple Music, Soundcloud and a glowing online review from Resident Advisor, and March’s follow up ‘Clear To You (feat. Francesca Gonzales)’ / ‘Healer’, the former of which was swiftly added to rotation at Double J and FBi radio after debuting on Dummy Mag.

Last month, Dro released three new albums under his various aliases (TUFF SHERM, PMM and his real name, Eugene Ward), with all proceeds going to the Asylum Seeker Resource Centre, a move he says was his attempt to do his part to provide material support during a time of acute need for the organisation. The charity releases saw pickup from Resident Advisor and Purple Sneakers, with the TUFF SHERM record making FBi’s album packet and seeing considerable support on its release week. 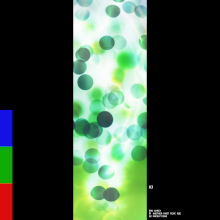 With ‘Another Knot (feat. RUE) / Predictions’, Dro Carey pushes the boundaries of his sonic identity, proving once again to be a master of his craft.