OF THE COURTNEY’S + CONNOR MAYER)

Listen now on Bandcamp, Spotify, Soundcloud and everywhere else.

“The song was inspired by a love of gardening and the gardener / plant connection,” Courtney explains. “We’re big fans of the Mort Garson album ‘Plantasia’, so it’s a bit of a tribute to that. We were also excited to have an excuse for Connor to use a vocoder. He does lead plant vocals.”

“Talking To My Plants” is available alongside an official Gum Country seed packet which is on sale now via Bandcamp. All seed packet sales will be donated to the ACLU (American Civil Liberties Union). Check out more info or get yours here.

Gum Country are an indie rock band brought to you by vocalist, guitarist and songwriter Courtney Garvin (The Courtneys – Flying Nun) and multi-instrumentalist Connor Mayer. Their self-described “harsh twee” project began back in Vancouver as a series of lo-fi four track recordings made in an apartment, very quietly. After relocating to Los Angeles where they currently reside, the pair recorded their debut full-length album ‘Somewhere’ with Joo-Joo Ashworth at Studio 22, this time at full volume.

Drawing on groups like Stereolab, The Replacements, The Breeders, Beat Happening, Yo La Tengo, Meat Puppets and The Magnetic Fields, Gum Country envelope and transform these influences in the warm embrace of Garvin’s fuzzy open-tuned guitar tone. Mayer’s driving drums and melodic keyboard accompaniments provide a backdrop for these rich textures, casually blending digital and analogue to produce a sound that would feel right at home on NME’s C-86 compilation.

The songs on ‘Somewhere’ meander through the highs and lows of daily life, touching on subjects ranging from love, loss, and anxiety, to tennis, video games, and gardening. Garvin navigates these topics with humor and sincerity, her unassuming delivery riding amidst the swirling instrumentals like a snowboarder shredding fresh pow.

Somewhere will be released digitally on June 19. The same day, Bandcamp will be donating 100 percent of its revenue to the NAACP in solidarity with recent protests against police racism and brutality. 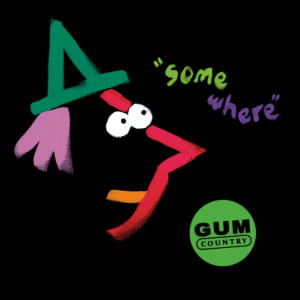 “‘Somewhere’ will give you that same euphoric tingle you felt after falling in love with your first underground jangle pop band. Nimble guitar riffs swarm around Garvin’s subtle, sweet vocals, and it captures everything great about fuzzy rock and good-natured, classic indie-pop.” – Paste Magazine

“distills that same electricity into an undeniable, Strokesian slice of escapism” – MTV

“has a rhythmic chillness to it, its chunky lo-fi chords chugging about steadily à la early Yuck” CONSEQUENCE OF SOUND

“Take a trip to Gum Country, and you might just find your new favourite band.” – For the Rabbits

“[Somewhere] merges a fondness for fuzzy lo-fi pop – C86 or Flying Nun for example – with its own brand of jangle pop minimalism.” – Clash