Debut album “Coldstream Road” follows the release of singles “Wolves” “Wind Nocturne” and “Solar” and news of a freshly inked deal with longstanding indie label, Spunk Records, whose eclectic roster of art-pop, indie rock and Americana has housed some of the world’s most acclaimed artists including Arcade Fire, Sufjan Stevens, Anohni, Bat For Lashes, Mac DeMarco and Joanna Newsom.

The 48-minute sojourn that is “Coldstream Road” snakes its way through cyclic chord changes and bucolic melodies to invoke a world that is both elemental and full of curiosity. “It’s the sound of me relating to instruments, to melodies, to lyrics. It has a very natural, earthy, wet green feeling to me,” says Church 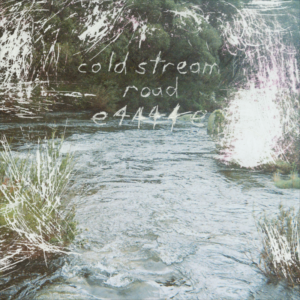 With his electro-acoustic musings – influenced by Arthur Russell, Pavement, Buck Meek and Michael Hurley and previously compared to the likes of (Sandy) Alex G and Animal Collective – e4444e creates a soundscape that is as celestial as it is grounded in the earth. On Coldstream Road, Church casts aside his samplers and drum machines in favour of acoustic instruments like guitar, piano and drum kits. As writer, performer and producer, opting for a simpler and more traditional approach provided him with an avenue to sound more exciting and unique than ever.

And yet Coldstream Road almost never came to fruition. After having finished most of the tracking and mixing, the hard-drive containing the album’s project files was left on the roof of Church’s car before driving into the night. Along with his phone and wallet, the hard-drive was found a few days later, smashed to pieces by the side of the road. Everything was lost save from the bare acoustic and vocal takes. Rather than wallowing in loss, Church was spurred into action and re-recorded the majority of the album at home in just four days. “I was working pretty much as soon as I got up till about six in the afternoon.”

Channelling Jack Kerouac, a-la his mythical three-week writing binge for On the Road, Church set to re-creating the album with a dogged determination and Zen-like calm. “It didn’t feel rushed, I just knew exactly what I wanted to do and did it. I think it kind of needed to happen. It made the album what I wanted it to be, just me letting the songs dress themselves.”

Such dedication to his craft has seen the young artist self-release 4 x EPs and a handful of well-received singles, cut his teeth supporting acts like Jens Lekman, GUM, Body Type and Hatchie and garner a loyal following.

“experimental electronic production, creating an immersive soundscape for listeners to get lost in” – FASHION JOURNAL