“I’m such an easy man to please”

Sydney-based artist Don West today marks his arrival with the release of his debut single ‘Money’. Outwardly innocent and endearing, ‘Money’ tells the tale of a quiet night that took a turn on account of profound escapism. It’s a song of prolonging the present to avoid the future and rationalising one’s decisions in the interest of pure unadulterated passion.

Packing an intriguingly nostalgic punch, ‘Money’ illuminates Don West’s crooning and honeyed vocals, setting them down felicitously beside dirty, crunching guitars. The track was produced by Scott Horscroft (Paul Kelly, The Presets, Middle Kids) at The Grove Studios on the NSW Central Coast. “‘Money’ is a tip of the hat to the girl I’ll probably never see again, that gave me the most memorable night I struggle to remember,” Don recalls.

‘Money’ is accompanied by a stunning visual, highlighting Don West’s palpable charisma. The clip was premiered overnight on Pilerats who describe ‘Money’ as “a shimmering indie-pop tune that’s gripping with emotion and class” and “a triumphant moment of rock.”  The ‘Money’ visual was shot on location at Sydney’s Borough Studios with overall direction by Thomas Austin and photography direction by Jack Shepherd.

Only last month, Don West was introduced to the world when he opened for Lime Cordiale at The Roundhouse – his very first live show. His performance hypnotised the crowd and earned him rave reviews. Now, in celebration of the release of his debut single ‘Money’, Don will play his first ever headline show at The Lair in Sydney on Friday 13 December. Tickets are on sale now. 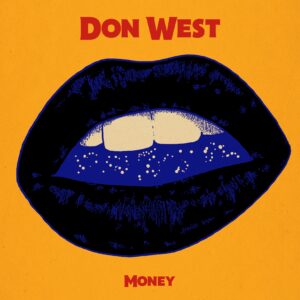