‘DON’T BANK YOUR HEART ON IT’

…..with a little help from his friends

It could be a considered a concept record. A fairly skittish, wonky concept, but a concept record nonetheless. Or maybe the best way to describe Davey Lane’s new album ‘Don’t Bank Your Heart On It’, to be released on 13 November 2020, is a mixtape. A dream mixtape featuring some of Davey’s favourite artists, performing songs he has written.

Call it what you want, but it’s clear on ‘Don’t Bank Your Heart On It’ Davey Lane is a tunesmith of pure class with 13 new songs brought to life with a little help from his friends.

Davey explains: “I’ve worked with some incredible folks over the years, many of them I’m proud to call friends, who helped me through the sometimes arduous, ultimately life-affirming experiences that informed these songs, so why not have them along to tell the story with me? For example, my best pal Tim Rogers reminding me why life’s worth living? Todd Rundgren and Vika & Linda as wizened souls delivering answers to some of life’s most existential questions – sure, why not!?”

And while names like Vika & Linda Bull, Rundgren and Rogers may just roll off the proverbial tongue with ease, you can add friends such as The Living End’s Chris Cheney, Phil Jamieson of Grinspoon, Tommy Stinson from The Replacements, guitar pop legend Robyn Hitchcock, All Our Exes Live in Texas vocalist Georgia Mooney, Mark Wilson from Jet and King Gizzard’s Stu MacKenzie to that list. That’s a “dream mixtape” indeed!

The first single from ‘Don’t Bank Your Heart On It’ however is all Davey. ‘You Were A Mirage’ let’s you in on the lyrical theme of the album. It’s deeply personal, about moving on both physically and emotionally, following the arc of a relationship breaking down, through pain and guilt to acceptance and hope.

Davey Lane has been honing his craft for quite a while now – working in the studio and on stage with artists such as Crowded House, Jimmy Barnes, Masters’ Apprentices, The Saints as well as legendary Australian rock group You Am I, with whom he has been standing stage right on lead guitar since 1999. Years of learning from many local and international songwriting greats has seen Davey continue to grow as a songwriter.

‘Don’t Bank Your Heart On It’ is his third full length album, following 2017’s ‘I’m Gonna Burn Out Bright’ which Beat Magazine described as “a delicious cacophony of shimmering, pop beats saturated in Lane’s silky vocals”. Some songwriters arrive almost fully formed and make their great record when they are 20. Lane took the long way around but all that experience has been brought into focus on ‘Don’t Bank Your Heart On It’.  It truly signals his arrival as a songwriter and singer to match his musical skills 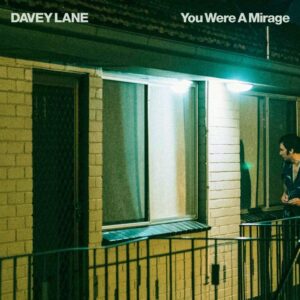 DAVEY LANE – ‘DON’T BANK YOUR HEART ON IT’

For those who crave a little extra, check out the ‘Don’t Bank Your Heart On It’ Deluxe Pack. With extra audio to satiate your aural appetite, extra reading to help decipher the album’s codes, concert admittance for those who enjoy the sensory overload of live entertainment and useful materials so Davey can just help you get through your day. All delivered by November 13.