Glory isn’t reached through the path of least resistance. Glory isn’t gained without pain. This is the proverbial challenge that emerging Perth-based artist Dallas Da Don has resolved to embrace and explore in his newest EP ‘Path of Temptations’, set for release on Monday, 12th of July.

Written by Dallas himself, the seven-track project chronicles all the tumultuous encounters that shaped the very core of his music and style. This series of sonic tonic and mood-setters is a product of multiple collaborations, featuring one of Perth’s finest and freshest artists, including Yohiighness, low key gifted, trajikk, Ups Da Don, Konks, and Tips, as well as up-and-coming Peruvian rap artist Emoney baggz.

With production, mixing, and mastering by sound legends Keezybeatz, Pmbp Music, and Dinje, ‘Path of Temptations’ is an ode to Dallas’ very own journey of overcoming temptations, trials, and tribulations. With the EP’s dynamic rhythms and beats, Dallas hopes that his audience can connect with it.

From a young boy who always heard music playing on the stereo while his mama was trying to sing along, Dallas definitely has come a long way. His stage presence, energy, and connection with his audience is truly notable—establishing himself as one of Perth’s most promising power performers. At this early stage in his career, he has already reached several milestones, such as headlining Perth’s biggest rap blockparty, Rap Life, and being interviewed on Radio Fremantle, among others.

“Consistency is the key! Keep at it, keep going, all gas, no brakes, bro.”—Dallas Da Don
Indeed, Dallas is an epitome of consistency and in giving it his all. With an upcoming performance on the next RapAround on August 13th, there are indeed no brakes for this rising star. So make sure to keep up with his upcoming shows and new releases by following his socials down below! 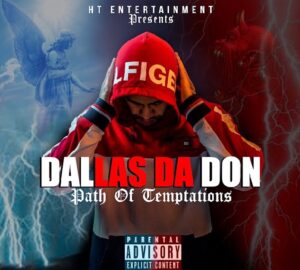