Norwegian alternative pop songstress AURORA has returned to reveal her latest single “Cure For Me” via Glassnote Records. The track stands as an alluring and enchanting reminder of what power the 25 year old beholds. AURORA is now pushing things forward like never before – see, she isn’t just a singer, but a warrior, a sage and a protector. “Cure For Me” is taking a new up-beat stance, featuring AURORA’s signature  soft yet soaring vocals, and builds to a darkly hued carnivalesque chorus.

LISTEN TO “CURE FOR ME” HERE

“Cure For Me” saw its World First premiere on Apple Music 1, alongside an interview with Zane Lowe, AURORA is also featured as the global cover of New Music Daily. Written in Australia by the pop chanteuse, the song is about breaking free from shame  and  shutting out the doubters.

“Sometimes I feel like the whole world Is trying to convince you something  is  wrong  with  you,” explained AURORA. “And  sadly  often  people  believe  this  to  be  true.  It  is  very  scary  how  easy  it  is  for someone  to  convince  you  that  you  are  wrong.  Or  that  you  are  overly  emotional, too  strange,  and  not  good enough. And I think it’s about time we shut those voices out. Because in no way should anyone convince you that you are not worthy because of the way you look, or act, believe in or love. We should be allowed to be human. And we don’t need a cure for it.”

With cryptic majestic scenery, the carnival themed video clip is a perfect pair for “Cure For Me.” Reminiscent of a mirror maze at night, the visual feature elevates the funfair flared track to the next level – almost as mesmerizing as AURORA as an artist herself.

AURORA has  proven  herself a well versed   triple  threat;  singer,  songwriting  and  producing. Since bursting onto  the scene in 2015 with her debut EP, “Running With The Wolves.” Since then, AURORA has amassed over 20 million monthly listeners on Spotify, accomplished a whopping 2.5 billion overall streams and 1 million+ global album sales.

Growing up surrounded by forests and mountains near Bergen, Norway, Aurora Aksnes first felt the compulsion to sit alone and create at six years old; by the time she was twelve she’d written “Runaway”, a song that would later receive a full release and, later still and thousands of miles away, would inspire another twelve year old, Billie Eilish, to make her own music.

“Runaway” found a second life this year after a TikTok trend went viral. Six years after its release, the song saw additions to some of the world’s biggest playlists including Spotify’s Today’s Top Hits, her social following grew to over 9 million with the addition of 440k Spotify followers, 1M Instagram fans, 1.3M Youtube followers & 2.7M on TikTok in 2021 alone.

In a world so beautifully overrun by multifaceted pop artists, AURORA leads the pack. Admired By many of her peers—from Troye Sivan and Doja Cat to Katy Perry and Shawn Mendes—there’s a strong case to be made for AURORA being your favourite pop star’s favourite popstar.

She released Infections of a Different Kind (Step I) in 2018, as the first part of the two album release and followed this up with A Different Kind of Human (Step II) in May 2019, to widespread critical acclaim. AURORA’s 2019 single “Animal” was added to full rotation on triple j and performances at Groovin’ The Moo 2019 solidified her strong presence in the Australian music scene. AURORA also featured on the soundtrack to the award winning Disney film Frozen II, which saw her perform the movie’s hit “Into The Unknown” on stage alongside star Idina Menzel, as part of the 92nd Academy Awards.

With the world on her side, and the wind beneath her wings, AURORA is taking on new heights with her latest single “Cure For Me.” 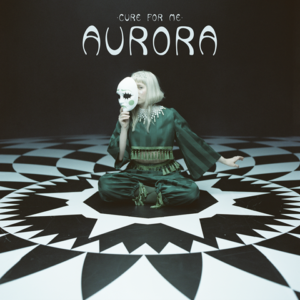 “Cure For Me” is available on all platforms now.