Frontier Touring are counting down the days until ARIA Award-winning vocal sensationConrad Sewell takes the stage this May and June for his biggest Australian headline tour to date. His highly anticipated, debut studio album LIFE is officially released to the world today (through Sony Music).

The LIFE tour will kick off at Astor Theatre in Perth on May 25 before heading to Eatons Hill Ballroom in Brisbane on May 31, Enmore Theatre in Sydney on June 1, The Gov in Adelaide on June 4 and finishing off with the now All Ages show at The Forum in Melbourne on June 7.

Fans will be treated to multi-platinum hits ‘Healing Hands’ and ‘Start Again’ along with fresh cuts from Conrad’s brand new record including fan favourites ‘Love Me Anyway’,‘Come Clean’, ‘Changing’ as well as the stunning title track itself.

Last year Conrad earned his third ARIA nomination for the colossal gospel-infused track ‘Healing Hands’ which has clocked over 21 million streams and peaked at #1 and #7 on the Australian iTunes Singles Chart and the ARIA Singles Chart respectively.

Frontier Touring are disappointed to announce Grace is no longer able to join her big brother as special guest on his Australian tour, but can reveal Brisbane singer-songwriterHazlett will accompany Conrad on all shows.

Returning to Australia on the back of a 14-date European tour opening for Swedish sensation SHY Martin, Hazlett is a self-proclaimed over-thinker whose music manages to find beauty in the banalities of modern life. Releasing ‘Fireworks’ the first glimpse of his upcoming sophomore EP (due Autumn 2019), Hazlett has seen more than we know and is armed with a voice of authenticity to sing about it all. Watch the live video for ‘Fireworks’here.

With shows kicking off this month, don’t miss the chance to see one of Australia’s most exciting acts performing songs from his brand new album!

Patrons are advised to purchase tickets only through authorised ticket sellers.
We cannot guarantee any ticket purchase made through any means other than
the official ticketing agents listed on the Frontier website. 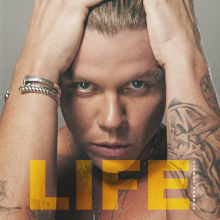