British India are thrilled to announce that after a one year hiatus and an uncertain future, they’ll be returning to stages along the east coast of Australia during October and November this year, with headline shows and a few killer festival slots along the way.  And that’s not all – the band have welcomed their new guitarist Jack Tosi; an old school friend of the group ready to rock for the upcoming run of shows.  They’ll be kicking off in Albury at Beer Deluxe on October 18, then moving through Canberra, Adelaide, Geelong, Brisbane, Sydney, Narrabeen, Currumbin, Belgrave, St Kilda, Hobart, and wrapping up at the Bridge Hotel in Forth, Tasmania on November 24.

A chance meeting between old friends – drummer Matt O’Gorman and guitarist Jack Tosi – turned out to be fortuitous.  Matt was on the hunt for a guitarist, and Jack was looking to play once again, it seemed a perfect opportunity.  A jam session was arranged, and by the session’s end, Jack was in the band.  He was the one and only guitarist British India had auditioned…it was meant to be, as vocalist and guitarist Declan Melia explains, “We’ve known Jack since high school, in fact, his band beat British India in battle of the bands back in the early days!  So, I don’t think it was a surprise that Matt asked him.  It’s no exaggeration to say that Nic was the only guitarist we had ever played with, so that’s why we were surprised when it all gelled so easily with Jack.  We were halfway through the second song when I turned to Matt and smiled like, ‘this is going to work’, that kid can play a guitar man! I’m so excited for these shows, it’s going to be a really strange and vibrant feeling. It’s going to be amazing actually. Where will it lead?  Who knows, but you know us, we love this music and this band too much to stop.”

Over the course of their impressive career, British India have earned four Top 10 ARIA albums, eight entries into the Hottest 100 and their classic single I Can Make You Love Meis accredited Gold in Australia.  Their latest album, Forgetting The Future, was met with widespread praise for its innovative direction and palpable energy, with singles My Love and Precious both being added to high rotation on both Triple M and triple j radio.

On the upcoming tour, British India will be armed with tracks from their entire discography, particularly boasting those from their bulging back catalogue of Australian live favourites – think Hottest 100 dominating tracks like Vanilla, I Can Make You Love Me and Suddenly; Australia’s most loved indie rockers are back on the road!  New guitarist Jack Tosi is thrilled to be heading out on the tour, as he enthuses, “‘I’ve know the guys since they started and it’s been great watching their success over the years.  I’m looking forward to getting on the road, playing these great songs and being part of the next chapter.”

Be sure to catch the legendary Melbourne rockers doing what they do best on a stage near you this October and November.

Tickets to the national tour are on sale now. 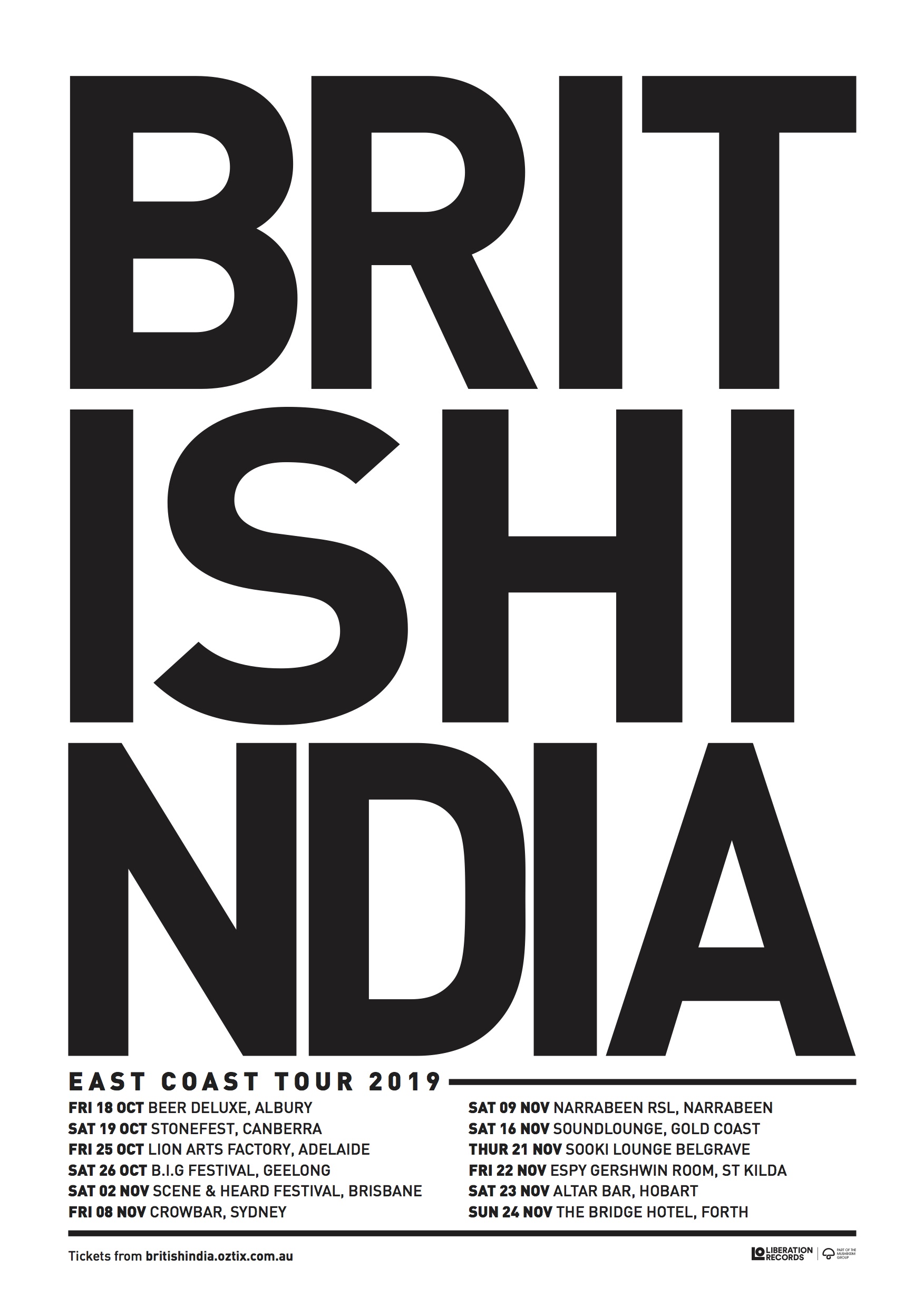 Keep up with British India