NEW ALBUM MOJO IS OUT NOW!

Ash Grunwald is stoked to release his brand-new album Mojo today! Acclaimed as one of Australia’s finest storytellers and live performers, Bloodlines is proud to release the next chapter in Ash Grunwald’s story.

“Grunwald’s deep, soulful tone is the star of the show” – STACK

Alongside the release of Mojo, Ash has just released his first ever book, Surf By Day, Jam By Night. The book combines Ash’s two passions – music and surfing – giving an insight into the minds of the legends who have mastered the art of both. Through conversations with Kelly Slater, Steph Gilmore, Jack Johnson and many more, Ash discusses what it’s like to live out your dreams.

To celebrate the release of Mojo, Ash will embark on a national tour this October/November, before heading across the pond to New Zealand in late November. When purchasing tickets for the tour, fans will have the option to donate $4 to 15Trees, which will go directly towards planting a tree. 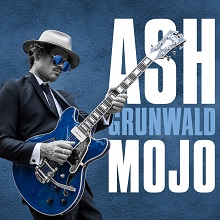 Ash Grunwald
Out now through Bloodlines
Available to buy/stream here